Cranbrook’s Greek Theatre owes it origins to the original water tower, which was built in 1910 in order to supply water to the homestead estate. The tower had a tendency to overflow and rather than have the water go to waste, the forward-thinking Booths built a family swimming pool on the ridge southwest of Cranbrook House in 1914. Water from the tower was channeled into the pool (which also received water from the Rams’ House along Cranbrook Road) and the overflow ran from the pool down cascading steps into the Grotto pools, and eventually flowed into Kingswood Lake.

The Detroit Society of Arts and Crafts (DSAC) was one of the chief interests of the Booths, with George Booth as its first president. Annually, the DSAC’s Little Theatre department performed outdoor plays, like the “Masque of Arcadia” (1910), at the estate of J.L. Hudson in Grosse Pointe. The idea of the Greek Theatre was born and George Booth commissioned architect Marcus Burrowes to site the building on the ridge near the swimming pool. Booth’s sketch plans were turned over to Burrowes and the result was a neo-classic amphitheater with an open-backed stage with a vista of the pool and bathhouse. The inspiration for the theatre is thought to have come from the ancient theatre ruins near Taormina, Sicily, where the Booths had traveled in 1914. Both the pool and theatre were completed on September 15, 1915.

Architectural details include panels on either side of the stage which are replicas made after Luca della Robbia’s fifteenth-century Cantoria. The bathhouse features replicas of ten of the frieze panels from the Western Frieze of the Parthenon in Athens, Greece. The entrance gate from Lone Pine Road to the Greek Theatre was envisioned when George Booth and his son Henry cleared a path through the brush. George Booth drew up the sketches and the gates were fabricated by Detroit Architectural Iron Works in 1916. The formal dedication of the Greek Theatre occurred in June 1916 with the performance of the DSAC’s “The Cranbrook Masque,” commissioned by George Booth and written by Sidney Howard Coe. Booth underwrote its production as a benefit for the Society. 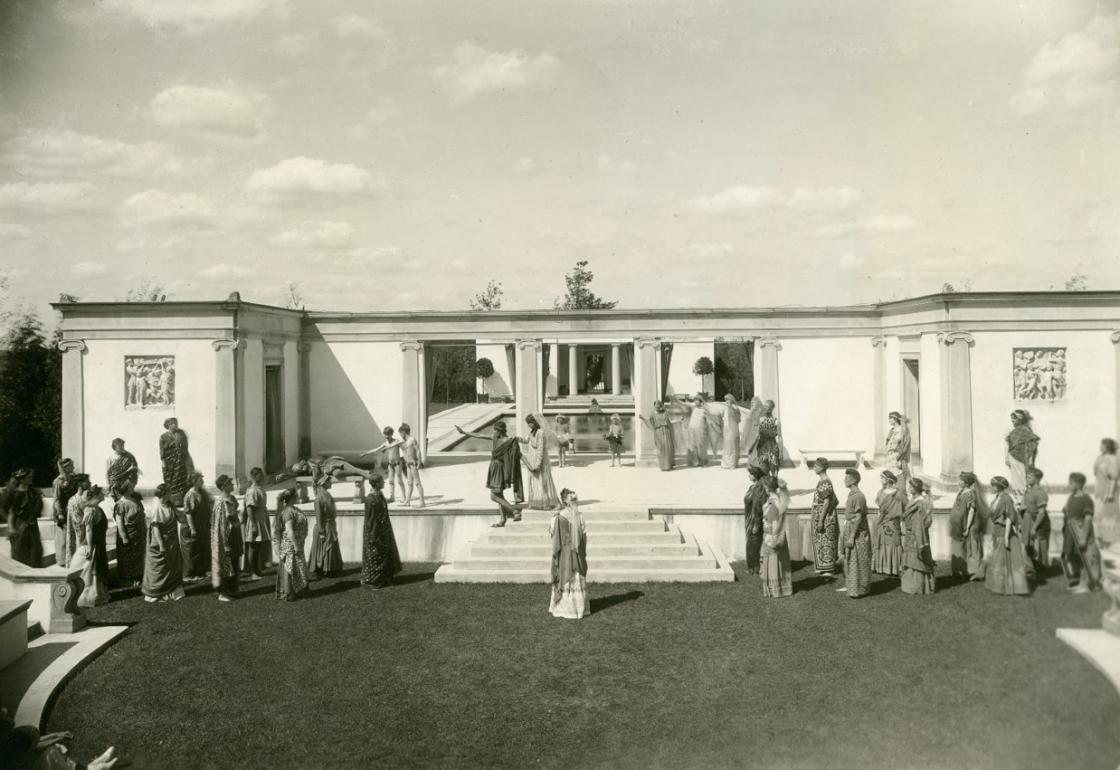 Over the years, various additions and renovation projects were proposed for the Greek Theatre and its surrounds. In 1923, Albert Kahn designed an open-air Garden House (completed in 1924) on Lone Pine Road to protect guests in inclement weather. (The Garden House was enclosed in 1934 by Eliel Saarinen when it became an exhibition space called the Cranbrook Pavilion.) In subsequent years, additions to the Greek Theatre have included upgrading the electrical, adding light poles for night lighting, and the creation of an elevated projection “booth.” In 1961, the Cranbrook community considered increasing the seating capacity, which would have included construction of a partially concealed orchestra pit. These plans, as well as a 1988 plan to cover the seating area and redesign the bathhouse and Actor’s Court, were never realized.

In addition to “The Cranbrook Masque,” the Greek Theatre has been used for a variety of functions in its 100-year plus history. The Booth family provided free motion picture films to the neighborhood community on Saturday evenings, often projected by either Warren or James Booth. They also used the Theatre area for large festive events, where lanterns were hung from the columns, and an orchestra provided music for dancing around the pool. In the summer of 1942, a series of free concerts by the then Michigan Symphony Orchestra, were sponsored by the Works Progress Administration for the benefit of unemployed musicians. In 1957, the first honors convocation for Cranbrook Academy of Art took place in the Greek Theatre, which is now the Academy’s annual Commencement ceremony, if the weather cooperates. In 1959, the Theatre was the setting for an “International Travelers Market,” a benefit for the Save the Children Foundation. In addition, several auxiliary organizations affiliated with Cranbrook, including St. Dunstan’s Guild and the Cranbrook Summer Theatre, have held performances in the Theatre for over fifty years.