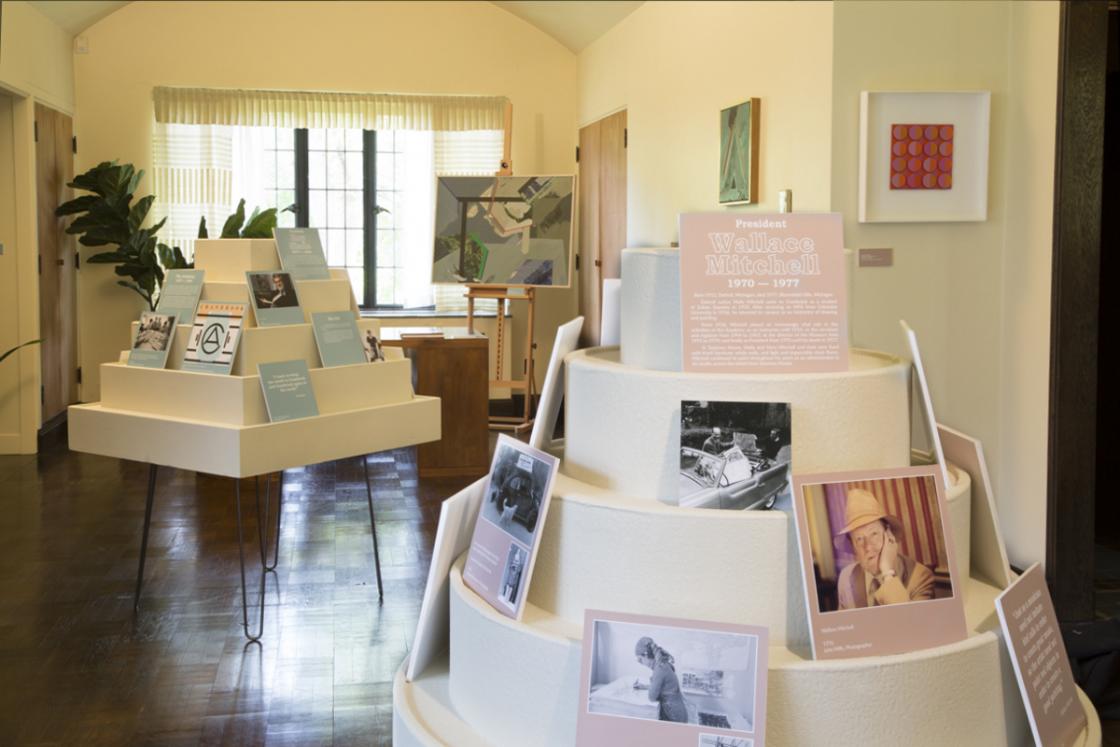 In celebration of Saarinen House: Presidents/Residents, 1946—1994, this behind-the-scenes tour will delve into the exhibition and visit some of the places impacted by past presidents of Cranbrook Academy of Art—Zoltan Sepeshy, Glen Paulsen, Wallace Mitchell, and Roy Slade. Visit their home (Saarinen House, the former Academy president’s residence), explore their studio spaces and buildings they designed or added to campus, and view rarely seen drawings and works of art they produced.

Join the Center for this unique, insiders look into Cranbrook’s history during the second half of the 20th century.

HIGHLIGHTS OF THE TOUR INCLUDE

Saarinen House. Tour the ground floor of the house purpose-built in 1930 as home of the Academy of Art’s president. Take an in-depth look at the special Presidents/Residents exhibition in the Saarinen House Studio with the exhibition curator.

Studios along Academy Way. Visit the studio spaces where Zoltan Sepeshy and Wallace Mitchell worked, today the departments of Print Media and Painting.

Foundry. This 1964 addition to the Academy was opened under Zoltan Sepeshy’s leadership as a facility for casting up to 1,000 pounds of iron or bronze, and where students under Julius Schmidt cast the infamous canon featuring a caricature of Sepeshy’s nose and mouth.

Gordon Hall of Science. Opened in 1976, Glen Paulsen’s brick and glass extension to the Cranbrook Schools campus was the premier secondary school science facility in the US. Off the glassy main corridor featuring an installation by Charles and Ray Eames, classrooms connect to a shared lab space with custom ventilator hoods and tables of Paulsen’s design.

Cranbrook Archives. Examine original works by architect Glen Paulsen, including his student sketchbooks and renderings produced for Eero Saarinen Associates. Guests will also have the chance to explore fifty years of Academy course catalogs and other Cranbrook ephemera. 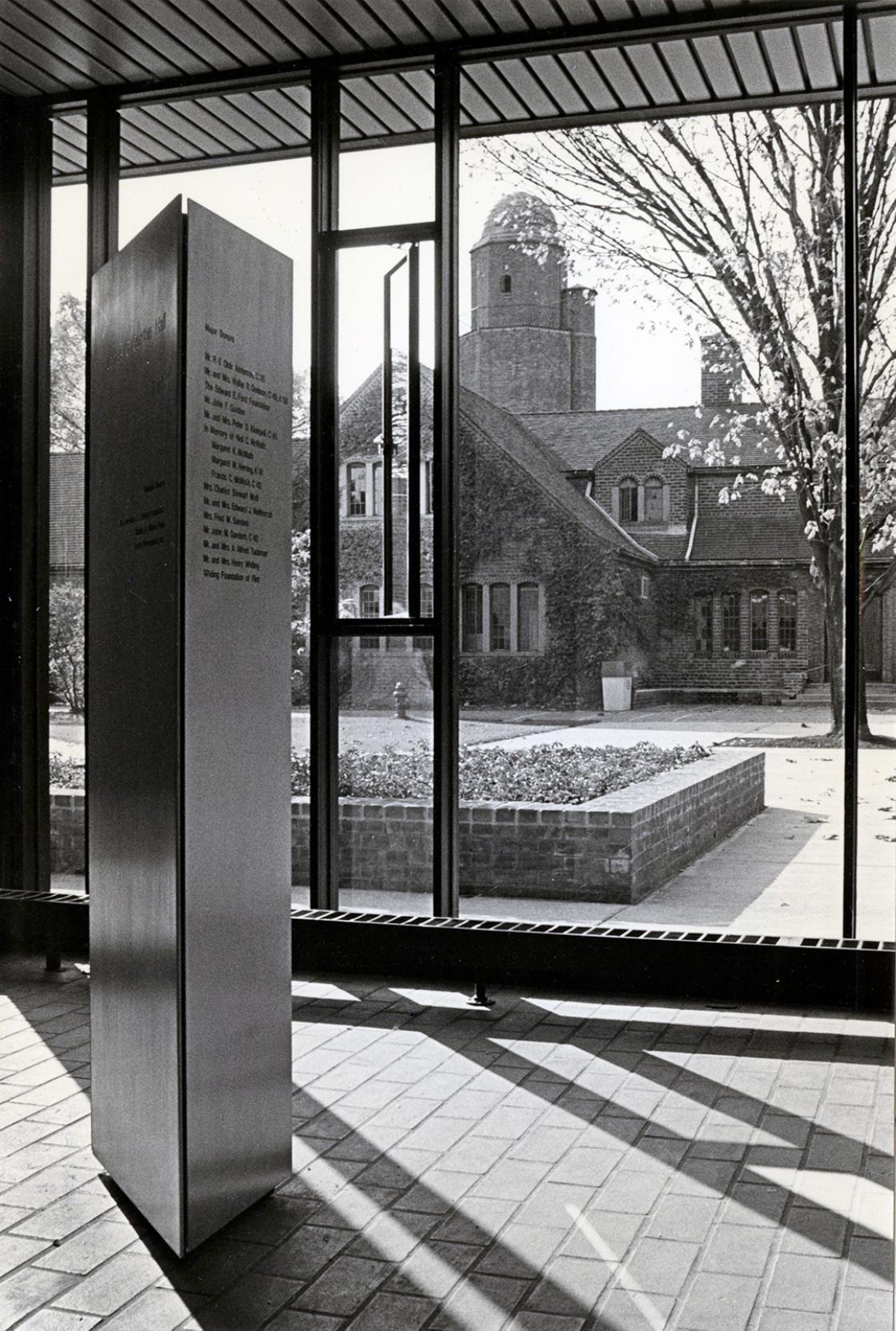 ABOUT SAARINEN HOUSE: PRESIDENTS/RESIDENTS, 1946-1994
The fourth in a series of interventions at Cranbrook’s historic Saarinen House, Presidents/Residents examines the artistic work and legacies of the four presidents of Cranbrook Academy of Art that followed Eliel Saarinen: Zoltan Sepeshy, Glen Paulsen, Wallace Mitchell, and Roy Slade. While Saarinen House served as the official home of these presidents from just 1951 to 1990, the exhibition traces their tenures as presidents from 1946 until 1994—a period of seismic social and artistic changes that were reflected in the work and culture of the Academy and reverberated in the rooms of Saarinen House. Through paintings and drawings on loan from Cranbrook Art Museum, as well historic photographs and ephemera from Cranbrook Archives, this exhibition surveys both the Academy leadership and its student life during the second half of the 20th century.

The exhibition features archival material and works by each former resident: painter Zoltan Sepeshy, who directed the Academy from 1946 to 1966 and moved into the house in late 1951 following the death of Eliel Saarinen in 1950; architect Glen Paulsen, who led the Academy from 1966 to 1970 and expanded Cranbrook’s campus with late-Modern additions; Wallace Mitchell, a Detroit native whose career at Cranbrook developed from student to painting instructor, then director of the Art Museum and finally president; and painter and educator Roy Slade, who led the Academy and its Museum from 1977 to 1994. Slade initiated the restoration of Saarinen House in the late 1970s and supported the transformation of this early modern, Art Deco design treasure into a public house museum in 1994.

ADDITIONAL INFORMATION
The tour will begin at the admissions desk of Cranbrook Art Museum, which is located at 39221 Woodward Avenue in Bloomfield Hills, Michigan. Free parking is available in the Art Museum’s parking lot on the east side of the Art Museum. This Behind-the-Scenes tour will include walking outdoors between campus buildings and multiple sets of stairs.

Advance registration is required as participation is limited. Tickets are non-refundable (but may be transferred to another participant). For more information, please contact the Cranbrook Center for Collections and Research. Our Administrative Assistant, Alissa Seelmann-Rutkofske, may be reached at 248.645.3307 (Tuesday through Friday, 9:00am to 5:00pm).