Open all year, daily from dawn to dusk

The Cranbrook Japanese Garden is among the oldest Japanese-style gardens in North America. Created in 1915 as a part of the country estate of Cranbrook’s founders George and Ellen Booth, this one-acre, pond-style strolling garden, is located at the eastern edge of Kingswood Lake, midway between Cranbrook House and Cranbrook Kingswood Upper School. The garden, which is centered on the Lily Pond and its two small islands, features an iconic vermillion Japanese-style bridge, the original 1915 Japanese Kasuga Lantern, and the recently rehabilitated Lily Pond Cascade with its new Mountain Lantern. 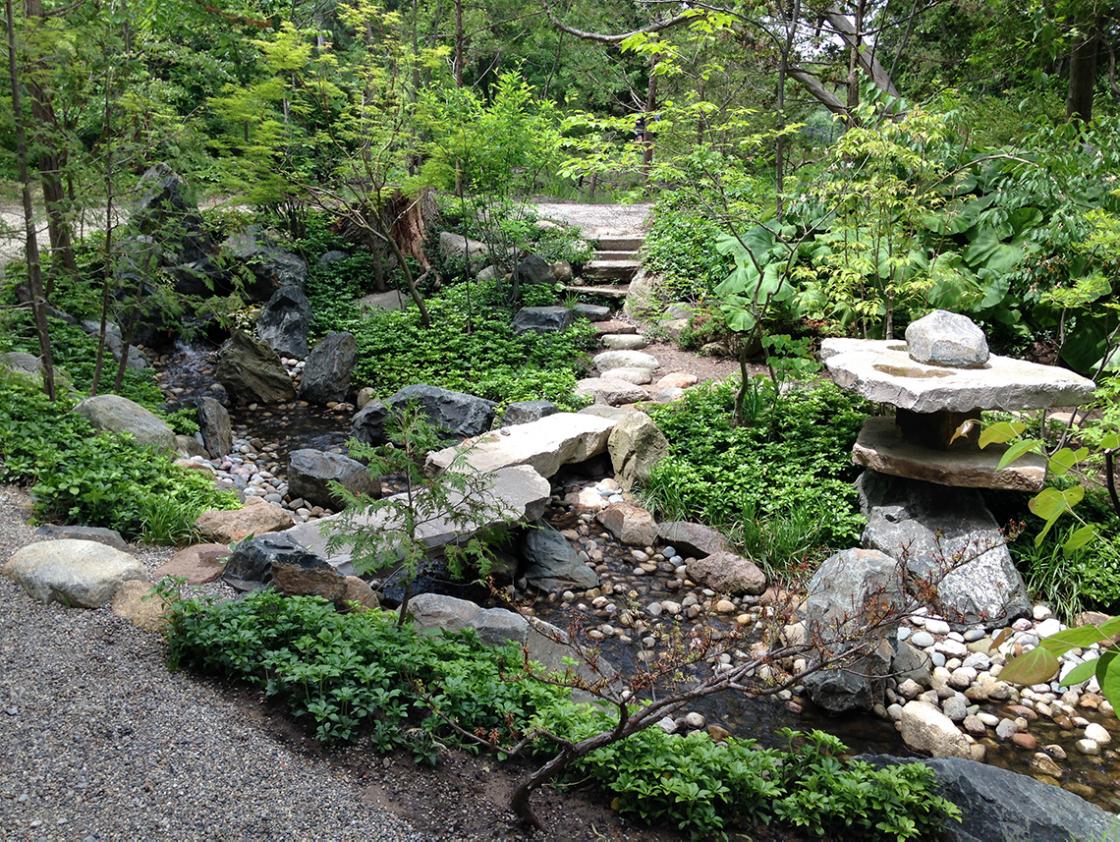 Although the garden is a place of beauty and inspiration, attracting thousands of visitors each year, it needs further rehabilitation. The effort to restore and rehabilitate the garden is being led by Cranbrook Center for Collections and Research. In 2019, Sadafumi Uchiyama completed a master plan for the rehabilitation of the entire Cranbrook Japanese Garden. The Center for Collections and Research now is in the process of raising awareness of and support for the next phase of the project, the creation of a new Entrance Garden in the southwest corner of the garden.

You are invited to explore this idealized representation of nature, follow its winding paths, cross its natural stone bridges, seek shade under the many mature cedars, admire the changing vistas from various viewpoints, and embrace the garden as your own. It is a place of beauty and solace in all four seasons. 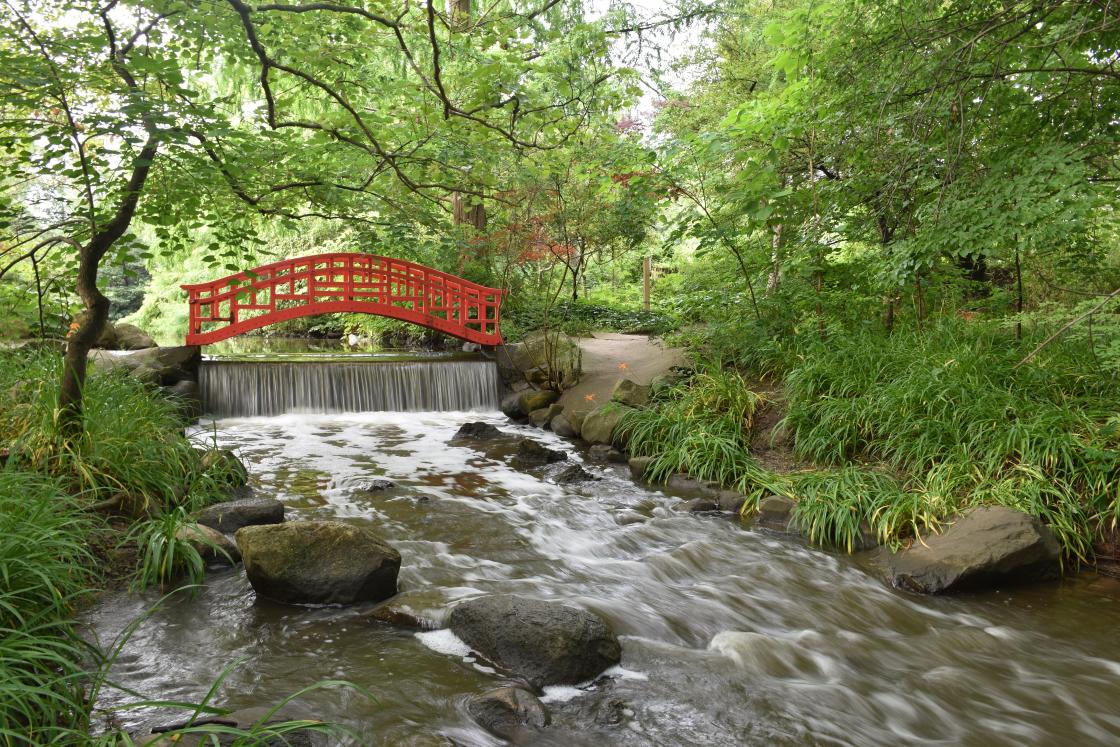 VISITING THE JAPANESE GARDEN
The best way to experience the Cranbrook Japanese Garden is while exploring Cranbrook Gardens, the forty acres that surround Cranbrook House, the original 1908 Arts and Crafts manor home of George and Ellen Booth.

Hours and Admission
Visitors are welcome to explore the Cranbrook Japanese Garden throughout the year. Cranbrook Gardens—featuring a formal Sunken Garden, terraced flower gardens, fountains and statuary, wildflower and bog gardens, lakes and streams—is open daily during the following times: 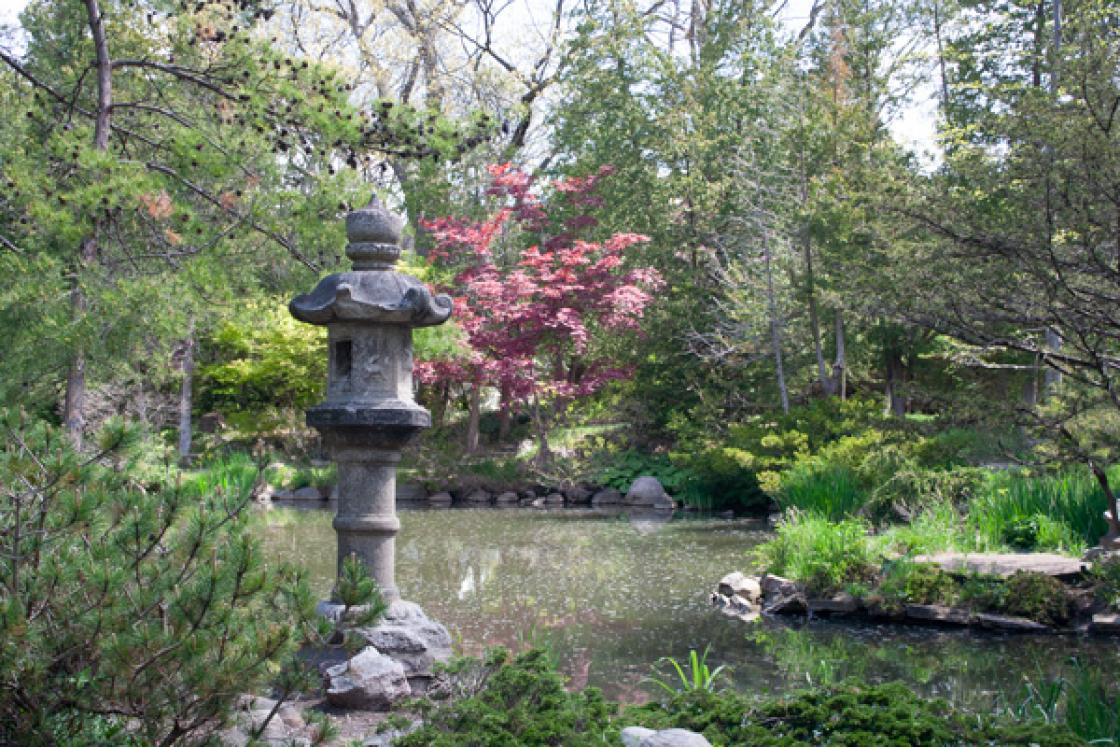 Location and Parking
Parking is available in the Cranbrook House & Gardens parking lot, which is located across from Christ Church Cranbrook.

Restrooms
An accessible restroom is located at the entrance to the parking lot. Restrooms are closed during the off season (November through April). 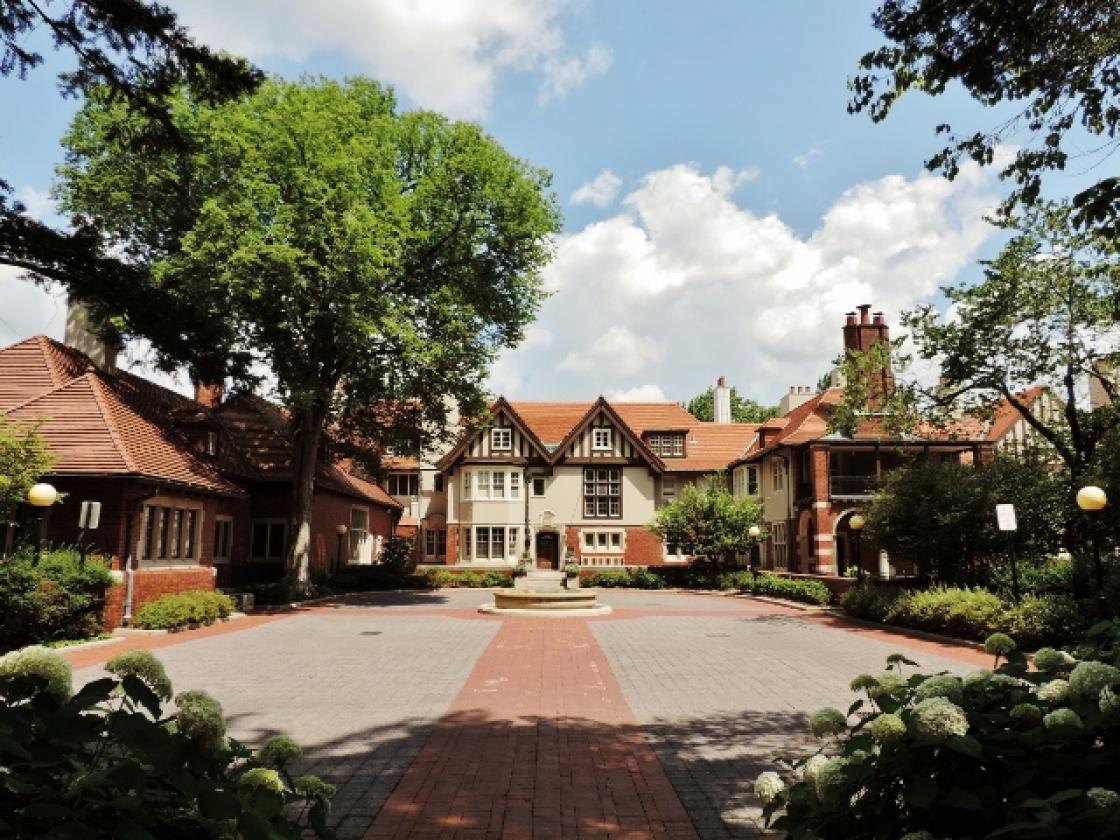 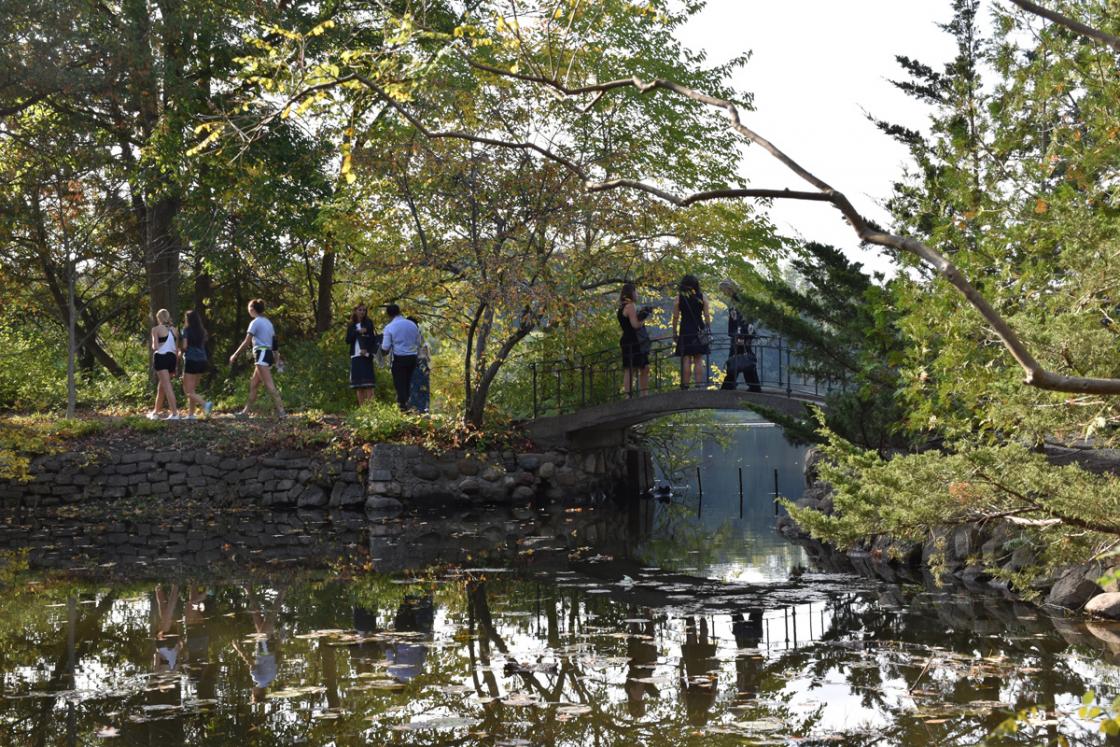 ACCESSIBILITY
The Cranbrook Japanese Garden is a historic landscape preserved and maintained as closely as possible to its original design. As such, there are certain natural and artificial surface conditions, such as grass, wood chips, stones, stairs, steep slopes and uneven terrain which can make walking and use of a wheelchair difficult. Assistance for persons using wheelchairs or walkers is recommended. Cranbrook Educational Community is a private, non-profit educational community that welcomes individuals to its public areas and is committed to providing reasonable accommodations for those who may require them.

JAPANESE GARDEN VOLUNTEERS
Cranbrook Center for Collections and Research has been working with a small group of committed volunteers to help rehabilitate one of the oldest Japanese gardens in North America. Working directly under the supervision of Emily Fronckowiak, Michigan’s only APA Certified Aesthetic Pruner, Volunteer Gardeners spend one day each month during the growing season (April through October) tending the Lily Pond Cascade, controlling invasive species, maintaining the existing paths, contouring and planting new groundcover along the restored Willow Pool shoreline, setting stone steps, and watering fragile plants. 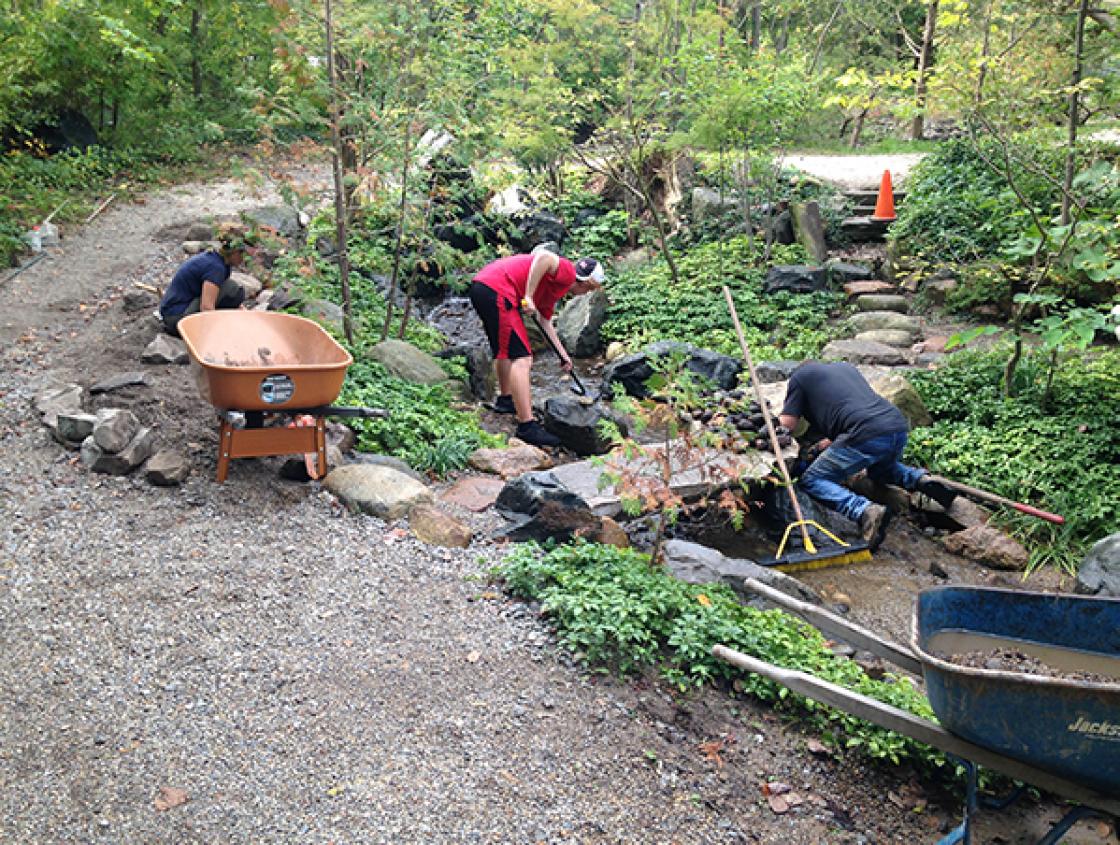 JAPANESE CULTURE EVENTS AND TOURS
Cranbrook Center for Collections and Research provides a context for the Japanese Garden through educational programs that explore the culture and arts of Japan. These have included chanoyu tea ceremonies, lectures by contemporary Japanese garden designers, a lecture about the relationship between Frank Lloyd Wright and Japan, and wagashi, shodo, and ikebana demonstrations.

SUPPORT THE NEW ENTRANCE GARDEN – THE NEXT PHASE OF THE REHABILITATION MASTER PLAN
Cranbrook Center for Collections and Research commissioned Sadafumi Uchiyama to design the master plan for the rehabilitation of the Cranbrook Japanese Garden. Completed in 2019 and updated in 2022, the plan respects the integrity and historic features of the Booth-era landscape while also enhancing its significance as a Japanese-style garden. Highlights include a new Entrance Garden and gazebo, a new viewing pavilion near the Northeast Landing, and enhanced cascades below the East Water Gate and above the Japanese Bridge. When complete, the rehabilitated Japanese Garden will be accessible with new ramped paths and wooden bridges along the edge of the pond. 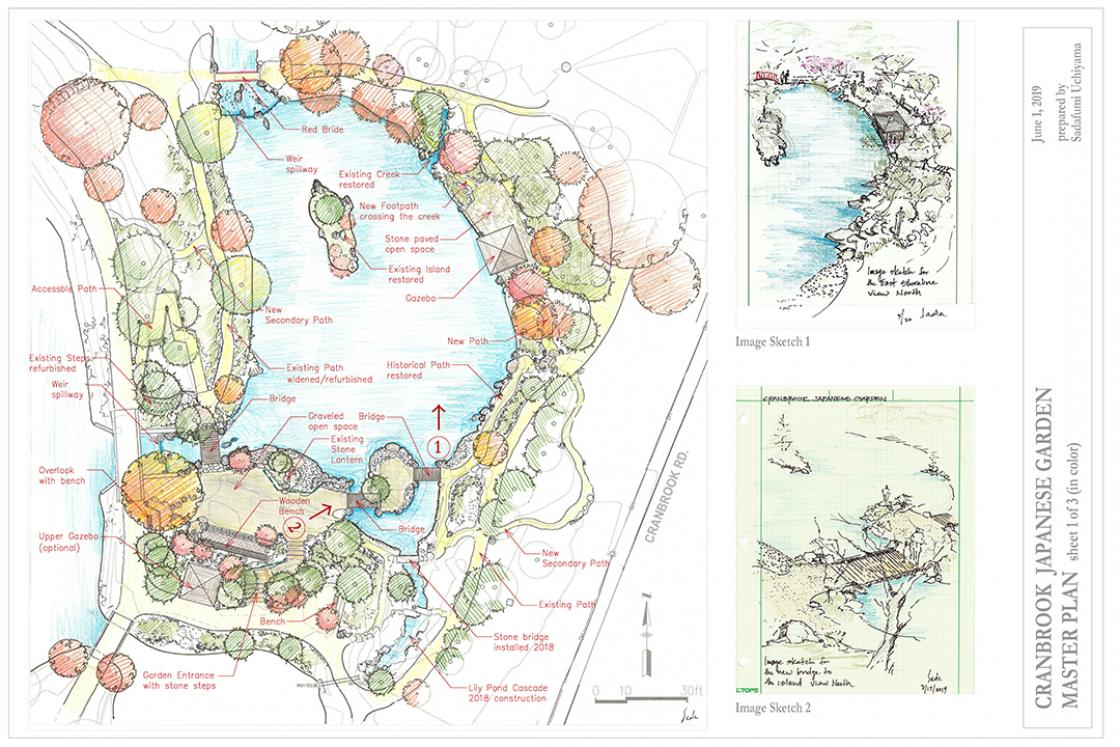 The creation of the Entrance Garden is the next phase of the rehabilitation. The Entrance Garden will feature a new path with stone steps leading down into the garden, and a long wooden bench inspired by the Ryōanji stone garden in Kyoto. To learn more about the Entrance Garden and what you can do to support its creation, please contact Cranbrook Center for Collections and Research Director Gregory Wittkopp at 248.645.3315 or gwittkopp@cranbrook.edu.

RESEARCH AND RESOURCES
The rehabilitation of a historic site such as the Cranbrook Japanese Garden begins with research. Following the Secretary of the Interior’s Guidelines for the Treatment of Cultural Landscapes, the Center for Collections and Research commissioned Quinn Evans Architects to research and write the Cranbrook Japanese Garden Historic Landscape Study. Completed in 2018, with Gregory De Vries the lead author, the report includes a detailed chronology of the garden, documentation of the landscape as it existed in 2018, identification of character-defining features remaining from the Booth era, and a summary of hydrology issues. Additional research has focused on individual components of the garden, including the Japanese-style bridge and lanterns. 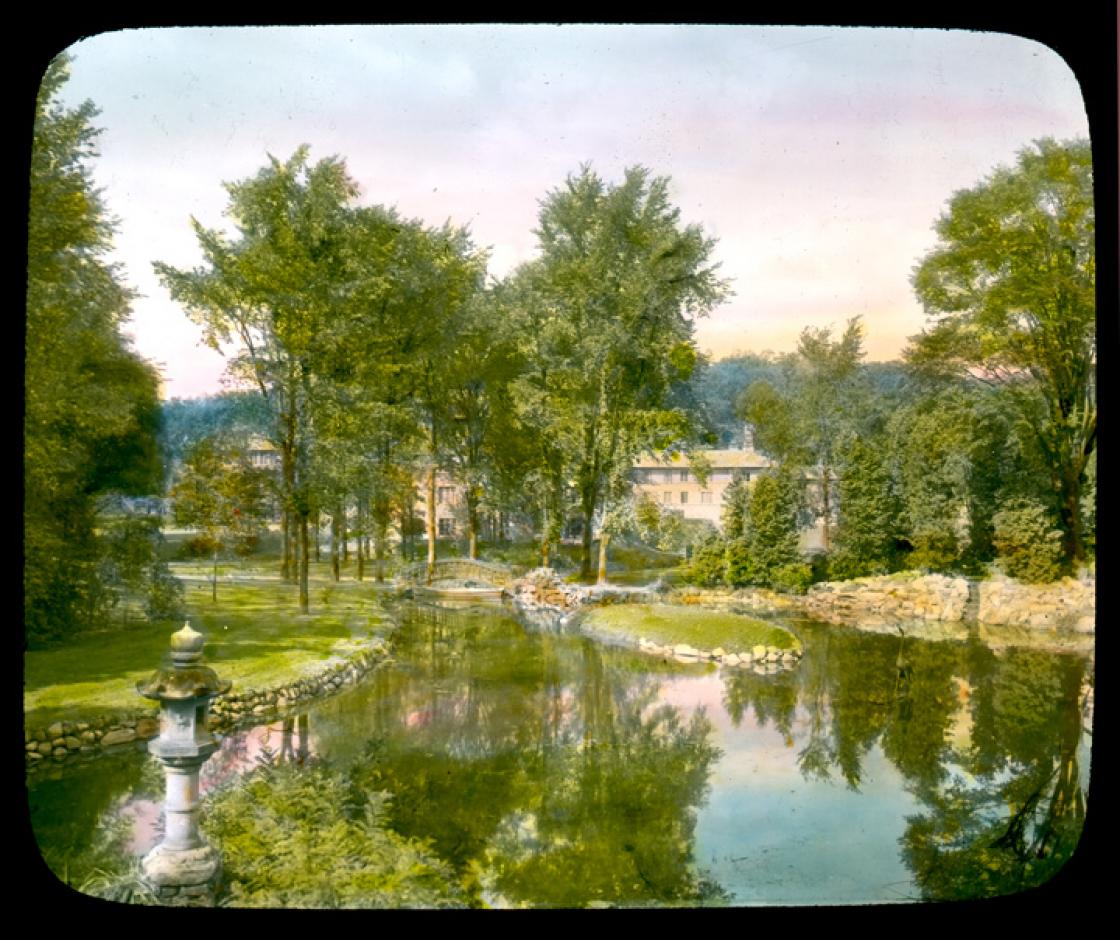 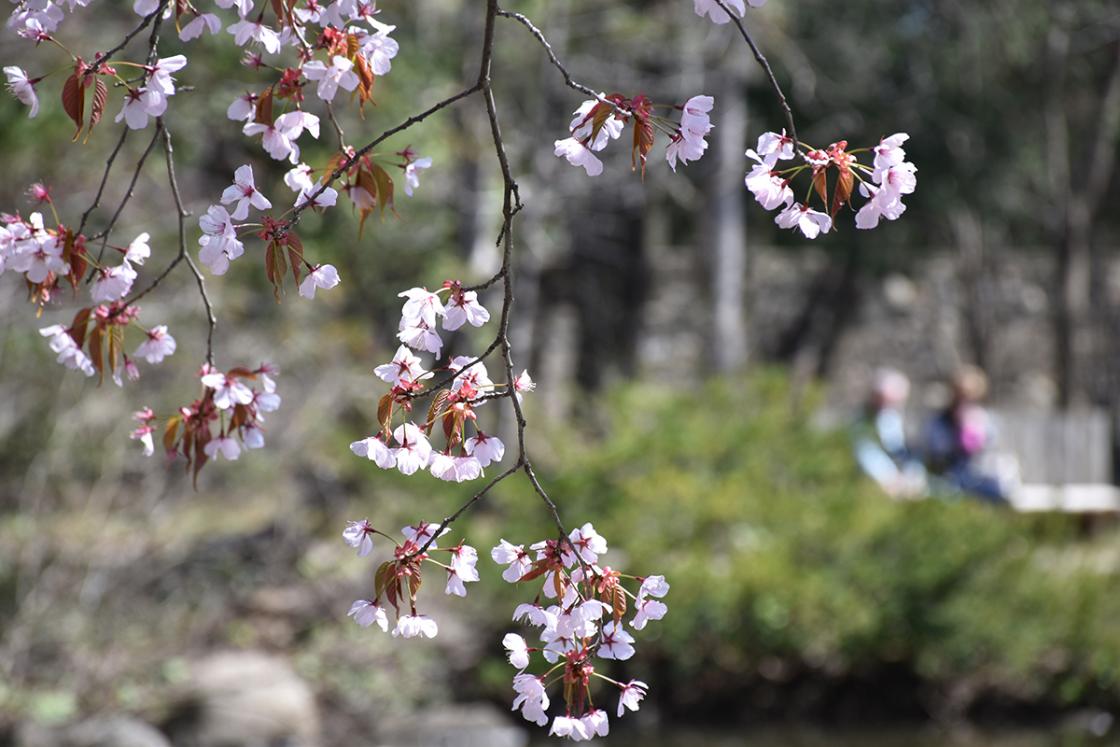 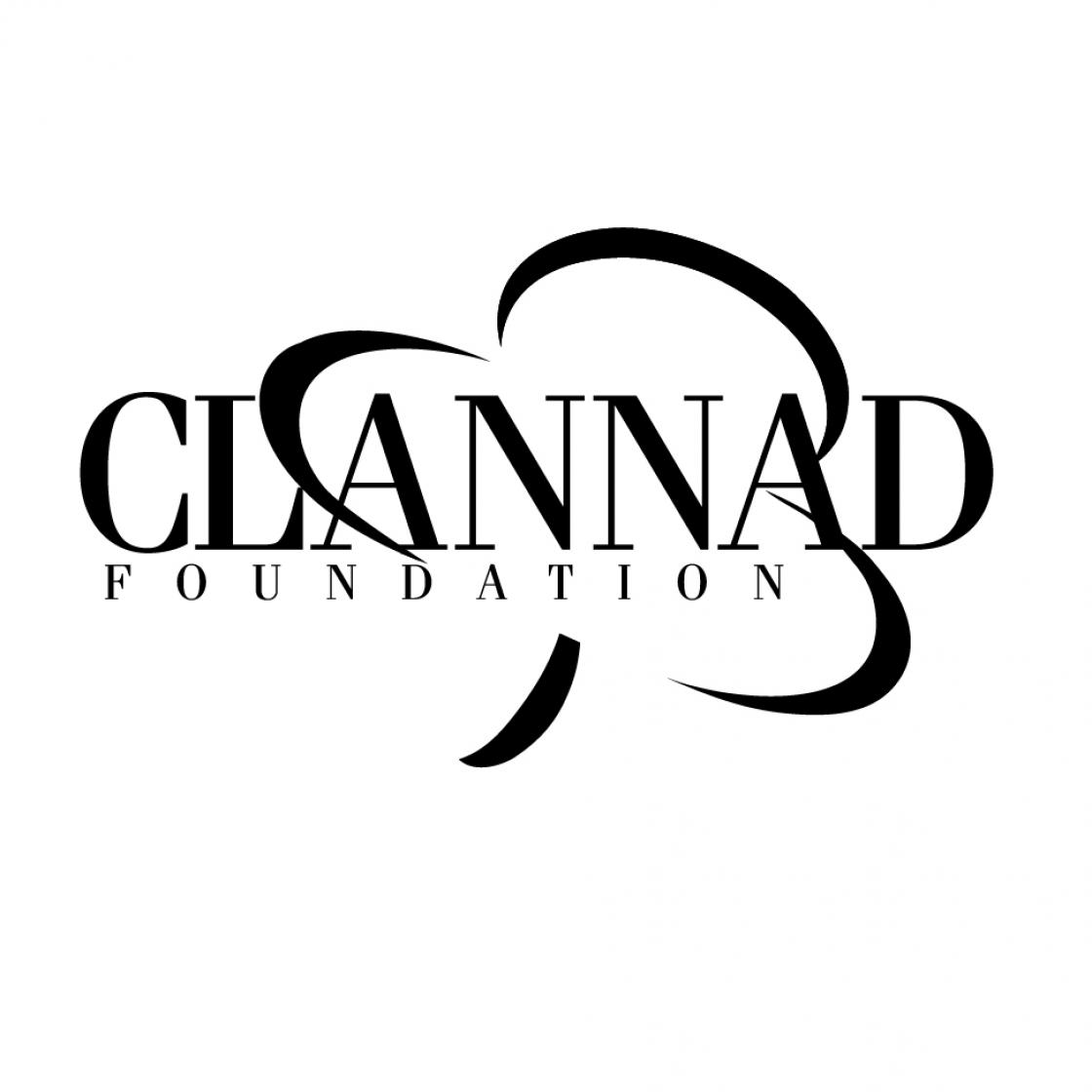 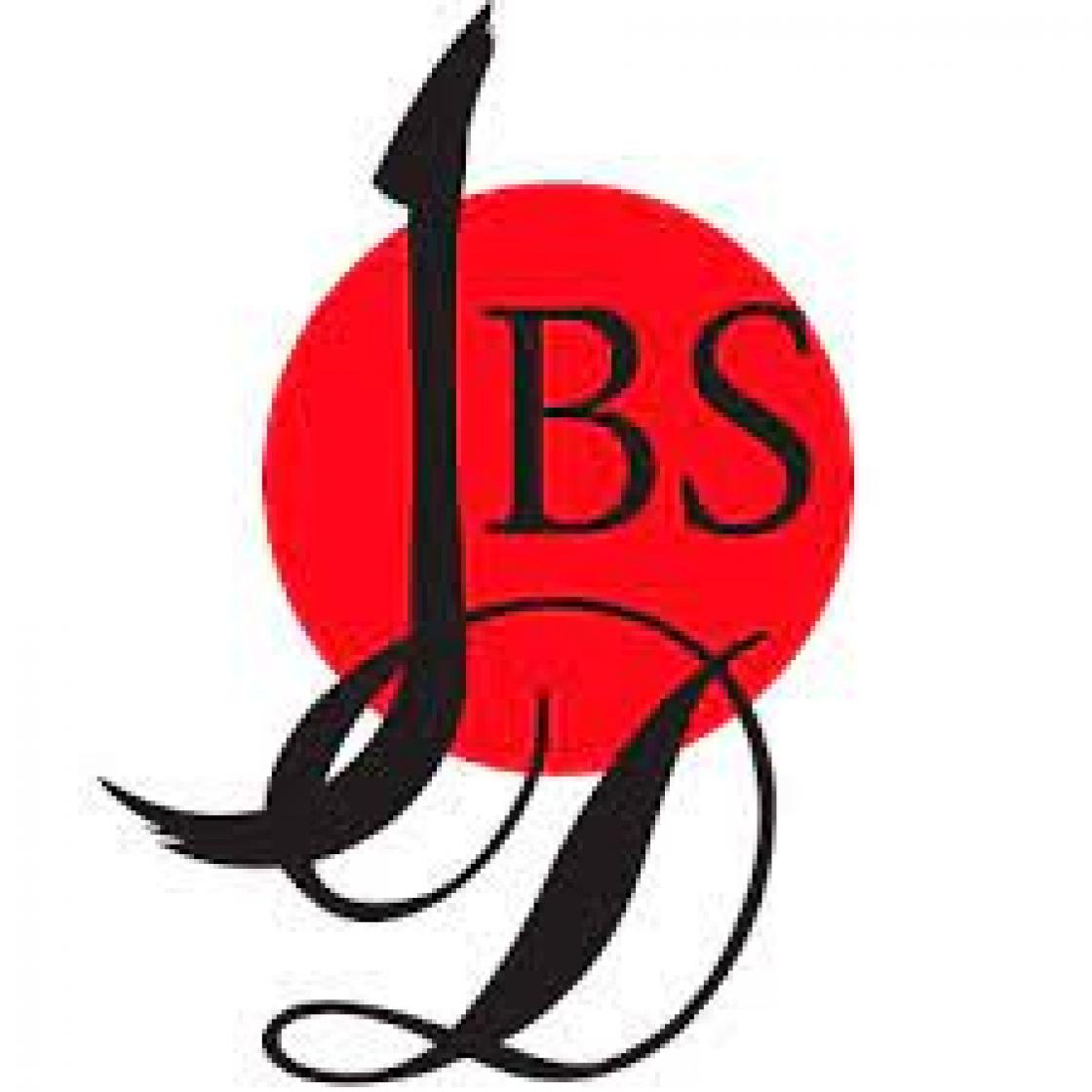 Path to the Cranbrook Japanese Garden along the Willow Pond and over the Corduroy Bridge, October 9, 2018; Photography by Eric Franchy.