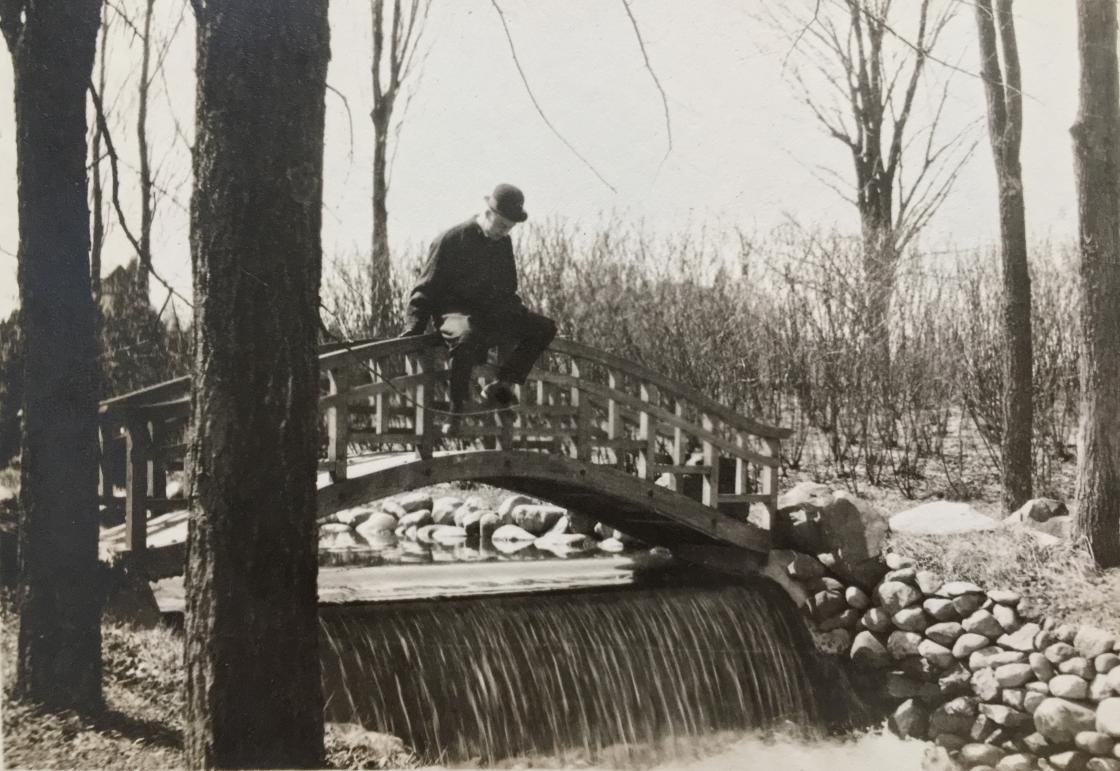 Although its designer and exact date of installation are unknown, the Japanese Bridge has been a part of the Cranbrook landscape since at least 1914, when it was recorded on a site plan drawn by the Chicago firm of Coats & Burchard. The first photograph of the bridge is from 1916, showing Henry Booth’s friend Jean Steketee sitting on its railing. Along with a Japanese stone lantern, Japanese plants, and bronze cranes (all ordered from California in 1915), the bridge was an integral element in the formation of the Japanese Garden by the Booths.

The bridge features nine structural posts across the length of each railing, each divided by an inverted T-shaped wooden element. The structural posts are secured into the main chord (or beam) of the bridge through a pinned mortise and tenon joint. The original chord was made of three pieces of wood lap joined together and then cut into the gentle curving design. The handrail is also constructed of lap joined wood, while the railing’s lower, decorative curved piece of wood is made of thinner wooden strips, tacked into grooves cut into each post. These construction techniques reflect the bridge’s likely makers, local craftsmen producing an Asian-inspired bridge (possibly Booth’s own design) using western joinery techniques.

A scrapbook assembled by George Booth between about 1910 and 1920, known as his “Inspiration Scrapbook,” highlights many Japanese and Asian influences he reinterpreted here at Cranbrook. Included in his collection of images are photos of a dramatically arching moon bridge, bamboo fencing, rock waterfalls, and other Asian or Asian inspired landscapes. Some of these elements would appear in the Cranbrook Japanese Garden, though no image of a bridge identical to the one built for Cranbrook exists. One image does, however, show a small straight-beamed footbridge crossing a low dam and waterfall exactly as our Japanese bridge sits above falling water.

Photos of the bridge in its first twenty years show it was left unpainted, which would have been in keeping with the look of a more traditional Japanese garden. However, the Cranbrook bridge has been painted red since at least the 1940s. Images from across decades of Kingswood’s Woodwinds yearbooks show the red painted bridge and its fond association for the Kingswood girls.

In the spring of 1957, a major flood breached the dam between Kingswood Lake and the Japanese Garden. The bridge was washed out, and subsequent repairs changed the aesthetics of the bridge. The deck, which had been made up of smaller boards flush with the top of the chord, was replaced with larger boards resting on angle bar bolted through the chord. These bolts were visible on the outside of the bridge. The railings themselves were installed backwards, with the decorative center curve of wood facing the inside of the bridge instead of the garden.

Over the next half-century, as maintenance of the Japanese Garden saw repeating periods of neglect and attention, the bridge remained a constant presence in the Cranbrook landscape. It was stripped of years of red paint by House and Gardens Auxiliary volunteer Jack Wells in the 1980s, and left unpainted for a year. Student and community concern that the bridge needed to be red (for tradition’s sake) led to its repainting.

In 2016, the then-unsafe bridge was moved by Cranbrook’s facilities team to its woodshop to undergo reconstruction and restoration by Cranbrook’s craftsman Steve Trout. Careful measurements were made of its chords and deck, which had become structurally unsound, and its railings were again stripped of paint. New chords were made of laminated redwood, bent and glued to the exact curve of the original chords. The railings were repaired and placed into mortises in the new chords, with the decorative line work again facing out towards the gardens for the first time since the 1957 repairs. A new deck was fabricated and installed, and the entire bridge was painted vermillion. The color was selected after careful study of appropriate precedents in Japanese-style gardens and the unique conditions of the bridge’s site. Its return in December of that year elicited delight from the Cranbrook community as a beloved landmark returned, better than ever. 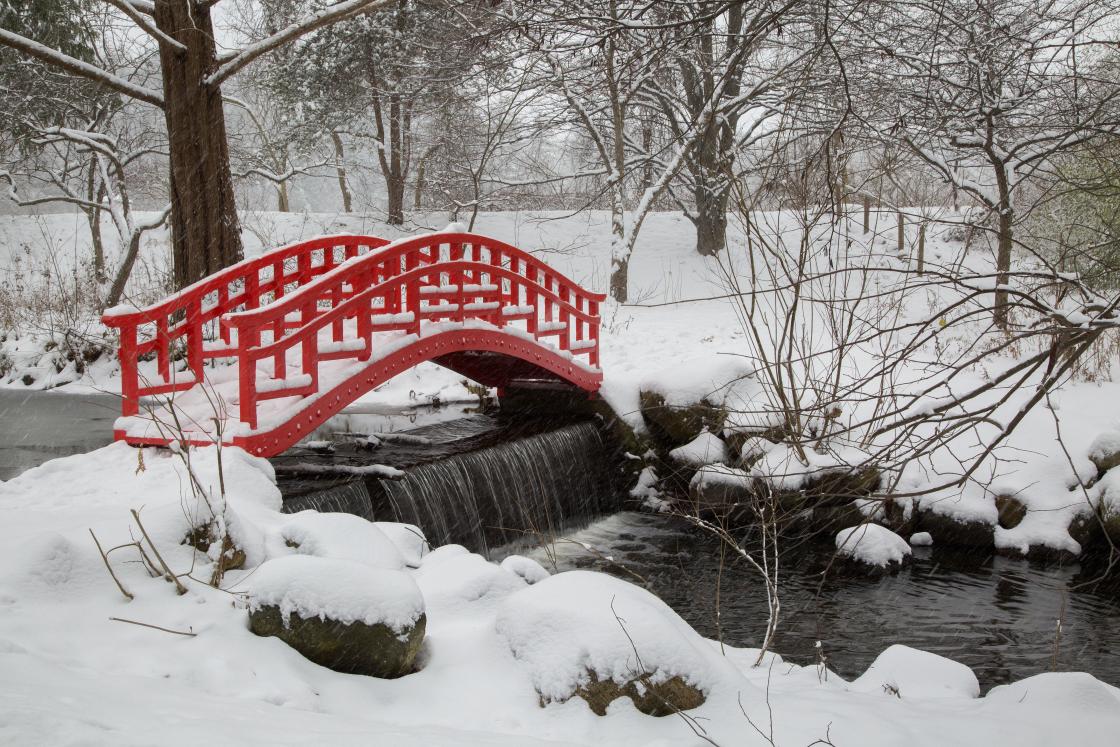