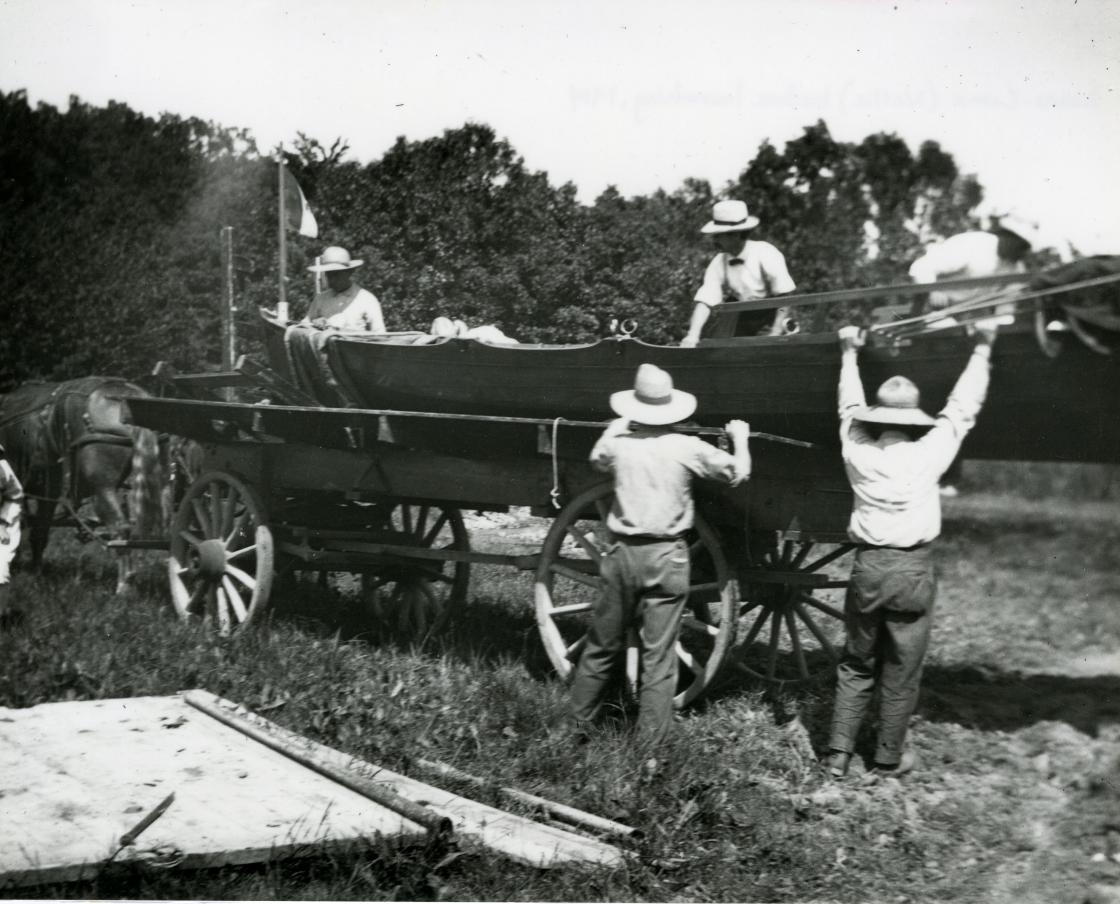 This twenty-three-foot long rowboat was purchased in Lenno, Italy, by George and Ellen Booth in 1915 and shipped back to Cranbrook for use on Glassenbury (now Kingswood) Lake. According to George Booth’s youngest son Henry Scripps Booth, he and his sister Florence "put on a little show" when the boat, which they named Nellie, arrived. It came to Cranbrook by horse drawn wagon from the Grand Trunk freight station in Birmingham. The show involved Florence and Henry dressed in white shirts and trousers with colorfully striped scarves around their waists, in the style of Venetian gondoliers.

The boat is designed to be rowed by two oarsman while carrying as many as six passengers. The boat is clinker built (also known as lapstrake, where planks overlap to form the hull), and its frame is made of walnut and it keel and deadwood of oak. The sheer strakes forming the rest of the hull are from boards cut from single lengths of fir. The iron oarlocks are unusually pattered and feature attractive decoration. The interior features a large "U"-shaped bench with removable seat backs, two oarsmen's thwarts (or benches), and small seats at the bow and stern.

It was after the boat's arrival that the building of a permanent boathouse got underway. While George, Ellen, and their children did not use the boat much, the grandchildren and other young family members for many years enjoyed sneaking out in the early morning for rows on the lake. The boat was long stored in the Cranbrook Boat House rafters and it was restored in 1986 by Henry’s grandson Philip Booth Ballantyne. It was maintained for a time by the Cranbrook Gardens Auxiliary.

At the stern of the boat, an engraved brass plaque was attached by Henry Scripps Booth in 1985. It reads: “'Nellie' Built in Lenno, Italia, on the shore of Lake Como in 1915 -- Rebuilt 1986 by Philip Booth Ballantyne at Cranbrook” Except for a brief appearance in 1998 at Cranbrook Art Museum in an exhibition by artist Buzz Spector (Beautiful Scenes: Selections from the Cranbrook Archives), Nellie has been stored safely on campus awaiting further restoration.