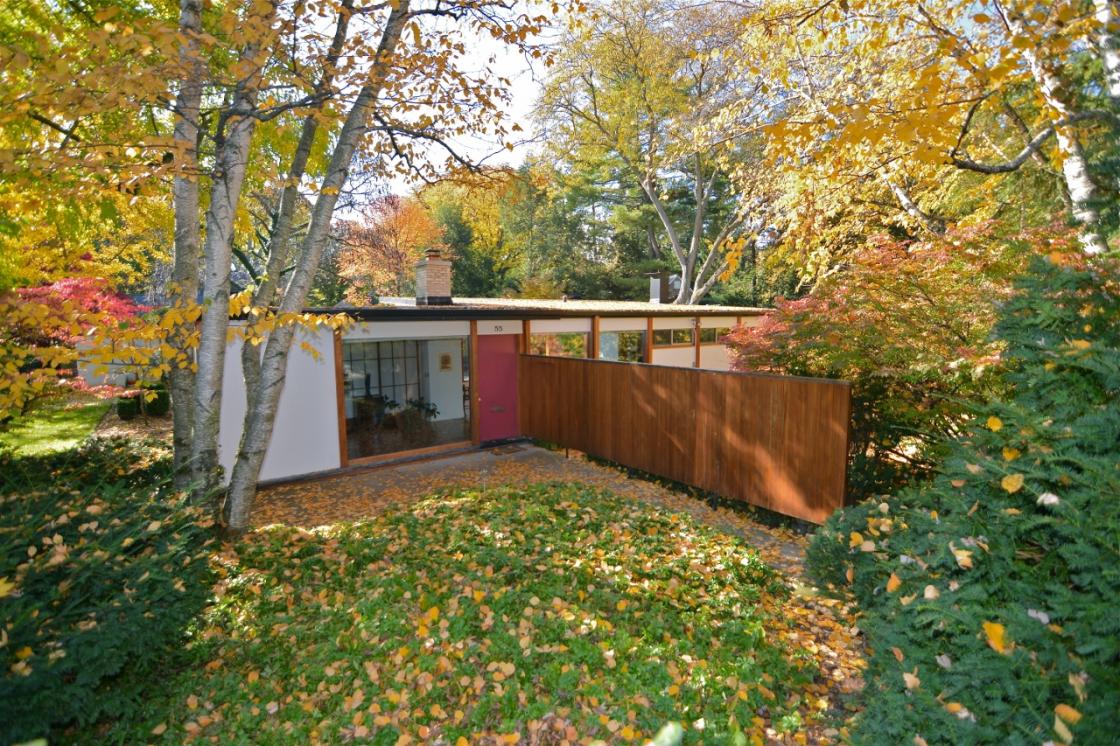 Join the Cranbrook Center for Collections and Research as we embark on our tenth Day Away, a series that explores Cranbrook connections off campus. Presented in conjunction with Cranbrook Art Museum and their exhibition, Alexander Girard: A Designer’s Universe (on view through October 8), the Center’s September trip explores four buildings by internationally-significant designers located in the Grosse Pointes, including a home designed by Alexander Girard.

TOUR DESCRIPTION
The day begins at Cranbrook Art Museum with a behind-the-scenes tour of Alexander Girard: A Designer’s Universe. Girard worked across the design spectrum: in architecture, interiors, textiles, graphics, and as a collector. Organized by the Vitra Design Museum in Germany, the exhibit presents hundreds of examples of Girard’s work, including many never-before-seen drawings and collages from the Girard archives.

We’ll then board the bus for Grosse Pointe, where half of our group will start at Girard’s 1950 house for John McLucas. The one-story structure, interior furnishings, and décor were all designed or selected by Girard, making this house a total work of art and a modernist gem. Rooms are grouped around a central courtyard, the walls of which are faced in colorful glazed bricks created in connection with Girard’s role as color consultant for Eero Saarinen’s General Motors Technical Center. While Girard completed several residential projects during his time in metro Detroit, the McLucas house is the only surviving home designed entirely by Girard.

The other half of the group will head to the Charles and Ingrid Koebel House, designed by Cranbrook’s own Eliel Saarinen, with his son Eero, and son-in-law J. Robert F. Swanson. With interiors by Pipsan Saarinen Swanson and textiles by Loja Saarinen, the home was a collaboration across the entire family. Completed in 1940, the two-story house with an office on the lower level was one of the first modern buildings in the Pointes. The forty-foot long combined living and dining room runs across the first floor overlooking a rear garden and its serpentine brick wall. Mahogany paneling, curving brick interior walls, and built-in furniture complete the aesthetic.

The groups will then swap places, and we’ll reconvene for lunch at Bucci Ristorante, a local favorite since its debut in 1999. Combining classical French training with the herbs and flavors of his native Croatia, Chef Bujar “Bucci” Mamuslari prepares his modern fare in an open kitchen, allowing us to view the magic of the chefs in action as we dine on three courses accompanied by wine or beer.

Dividing again into two groups after lunch, we’ll tour the home architect Paul Rudolph built for Frank and Anne Parcells and their five children in 1970. While Rudolph is most famous for his concrete brutalist architecture, for the Purcells he created a wooden, three-story house with rooms distributed across five different levels, all connected with balconies and stairs. From the outside, these levels are expressed as extruded wooden boxes holding massive windows overlooking Lake St. Clair. Hidden from the street by Rudolph’s dense landscaping, our tour will take you through the house and onto its lakefront lawn.

We’ll also visit the Grosse Pointe Public Library. Dedicated in 1953, this two-story brick, glass, and steel building by Marcel Breuer & Associates added a central branch to the libraries of the Pointes and introduced Modernism into the civic buildings of the area. The library was one of the first major commissions Breuer had in the United States; Breuer was brought onto the project by Detroit’s legendary architectural historian and patron of the arts W. Hawkins Ferry, who knew the architect from his studies at Harvard. Ferry also assisted in outfitting the library with contemporary art, including an Alexander Calder mobile, a Wassily Kandinsky tapestry, and an entrance sculpture by Lyman Kipp.

After the groups swap places once more, we’ll head back to Cranbrook, arriving by 5:30pm.

ADDITIONAL INFORMATION AND RESERVATIONS
The cost of this all-inclusive guided tour is $145 per person, which includes a $50 tax-deductible gift to the Cranbrook Center for Collections and Research. Guests may arrive at Cranbrook Art Museum for registration and coffee between 8:30 and 9am. The day starts in the Museum’s galleries at 9am. The bus will return to Cranbrook by 5:30pm. Free parking is available in the Art Museum’s main parking lot to the east of the museum.

To purchase your seat, please call Jody Helme-Day at 248.645.3307. Tickets are non-refundable, but may be transferred by the purchaser to another guest. But don’t delay—the tour is limited to 50 guests and all of the past Day Away programs have sold out, often within a couple of days of the formal announcement!

Please note that this tour will include walking tours of the four buildings. Only the library has an elevator to the second floor. The tour will take place rain or shine. Please wear comfortable shoes.