The private spaces of Saarinen House received the same intense design focus as the principal public rooms of the home. From the blues and greens of the upstairs hall to the gridded geometry of the owner’s bathroom, the Saarinen family designed every element of their American residence.

On this floor, the artists participating in Speculative Histories responded to the personal lives of the Saarinens and the ritual aspects of daily life: getting dressed, eating breakfast, or writing love letters. 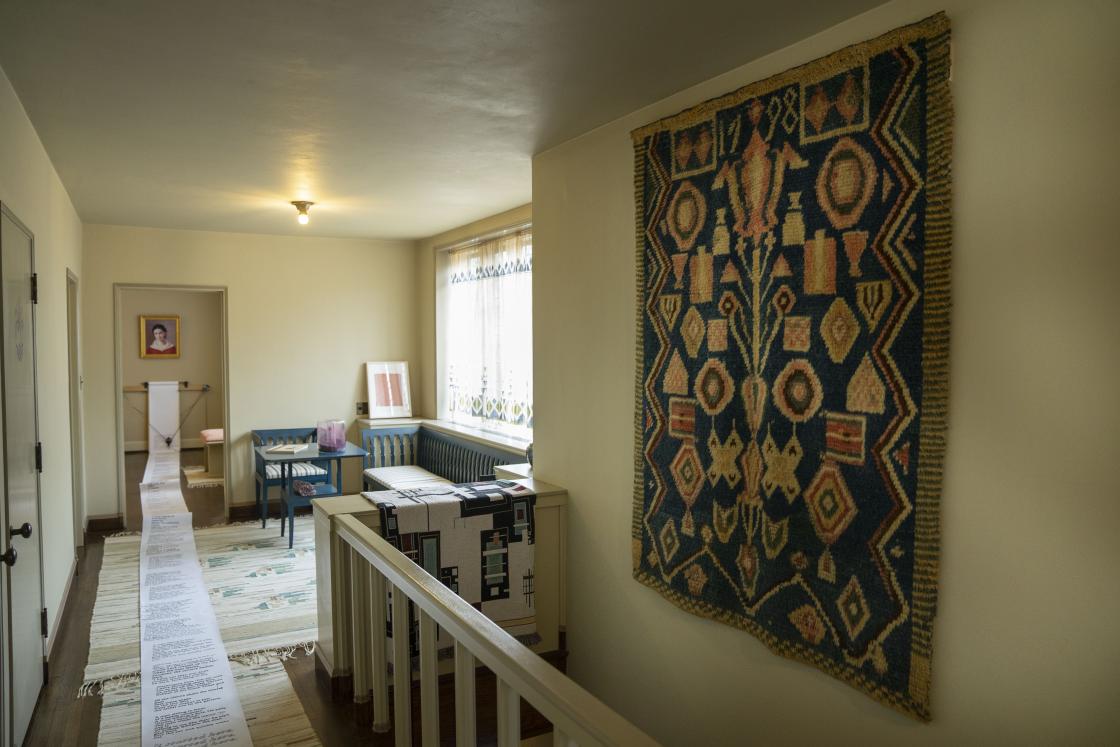 Inside the linen closet, painted with shades of blue in the Swedish tradition, Rebecca Frantz’s sculptural ear seems to listen in for what conversations might be whispered as one goes about their day at home. Draped over the wide stair bannister, in a place where Loja Saarinen displayed lace or embroidered fabrics, is Julian Jones’s study of Russian constructivist graphic design. His studies have been digitally manipulated and then woven into a blanket by Jacquard looms in North Carolina. This contemporary method of custom, on-demand textile production stands in stark contrast to the handweavings that distinguished Cranbrook’s early years—a 21st century update for this century of the Academy’s long interest textiles.

The laborious, even ritualistic, hand stitched Repair 1 leans against the wall in place of an Eero Saarinen drawing. Fiber Artist-in-Residence Mark Newport examines the value of damaged materials, and the labor and time invested in traditional darning practice. Time and ritual are also interests of Meredith Morrison, whose large glass bead is filled with blueberry powder (the artist’s preferred breakfast). Here, in the bright and airy alcove where the Saarinens ate breakfast for decades, the blueberry powder’s slow release and consumption marks the passage of time. Below the bead, a handmade textile of smaller purple glass beads sits carefully folded. As a surprise coincidence, the reproduction Loja Saarinen curtain in this alcove was woven by Paula Stebbins Becker, Fiber 1993, with blueberry dyed wool. 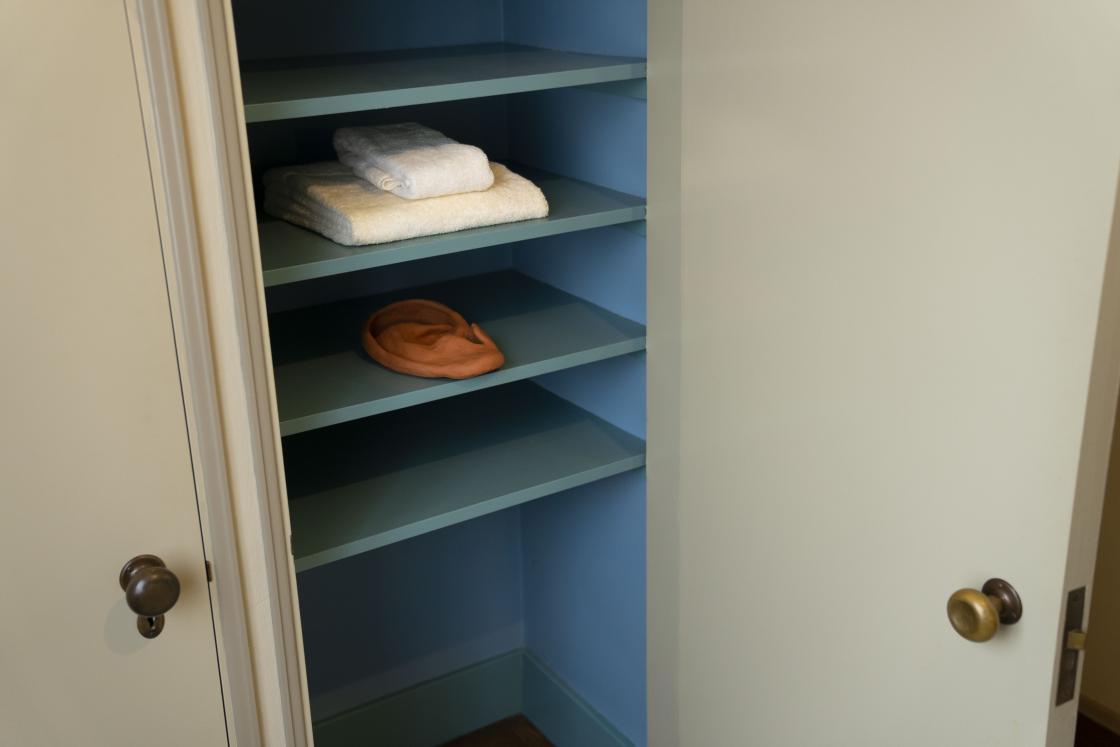 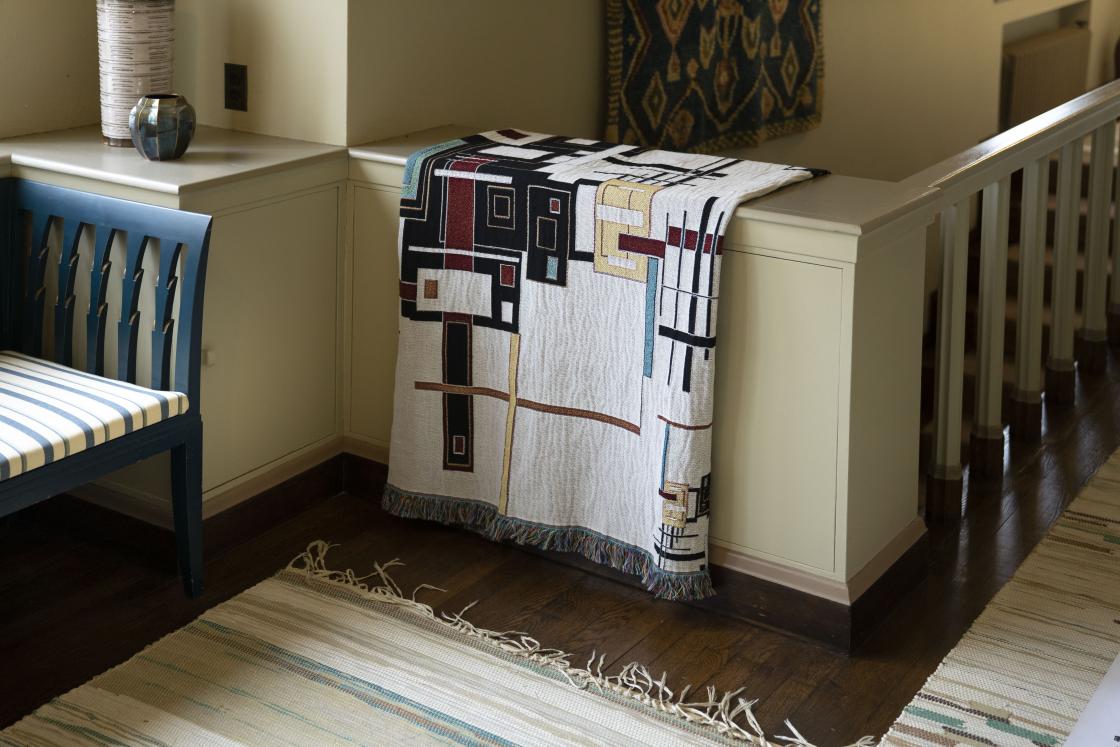 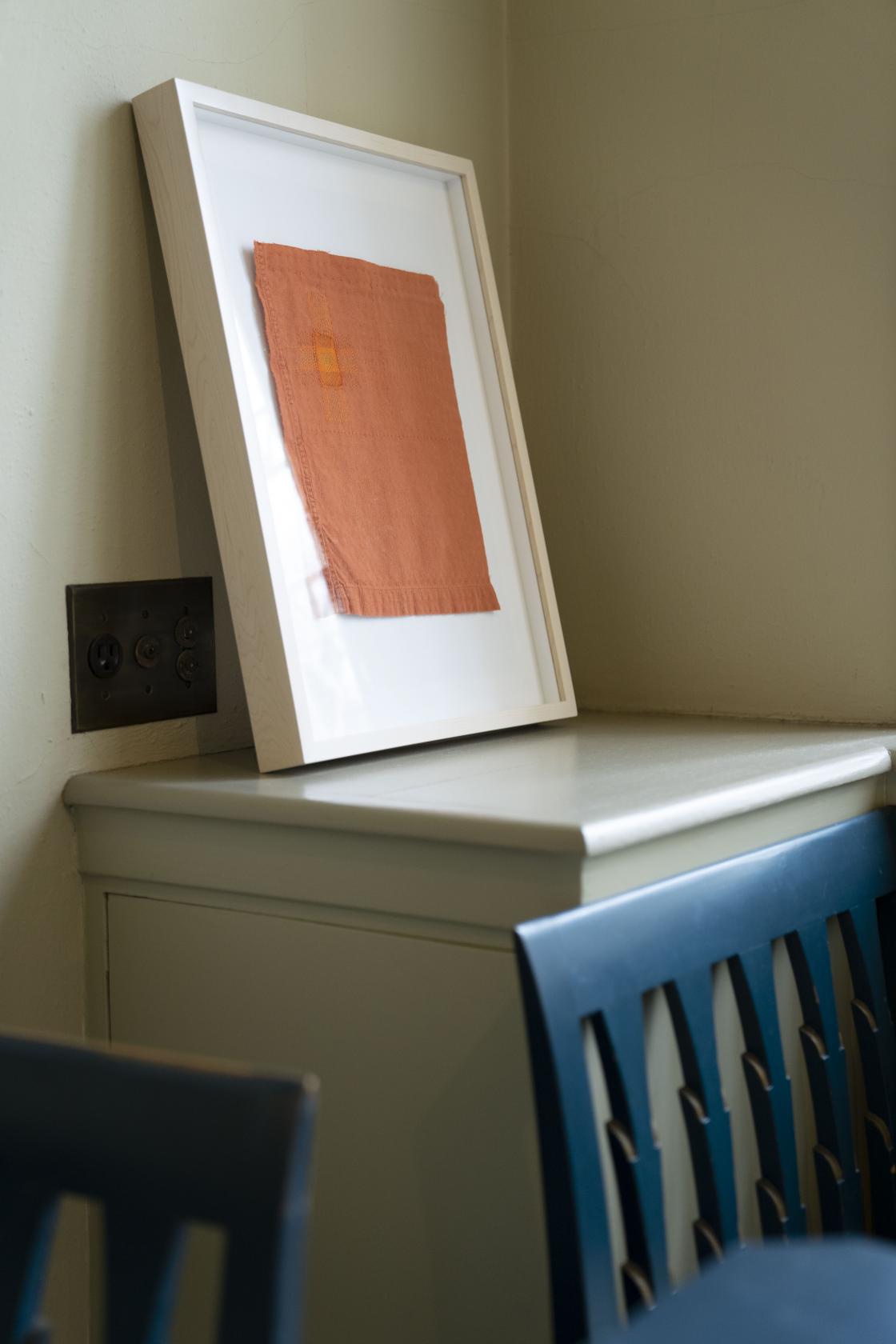 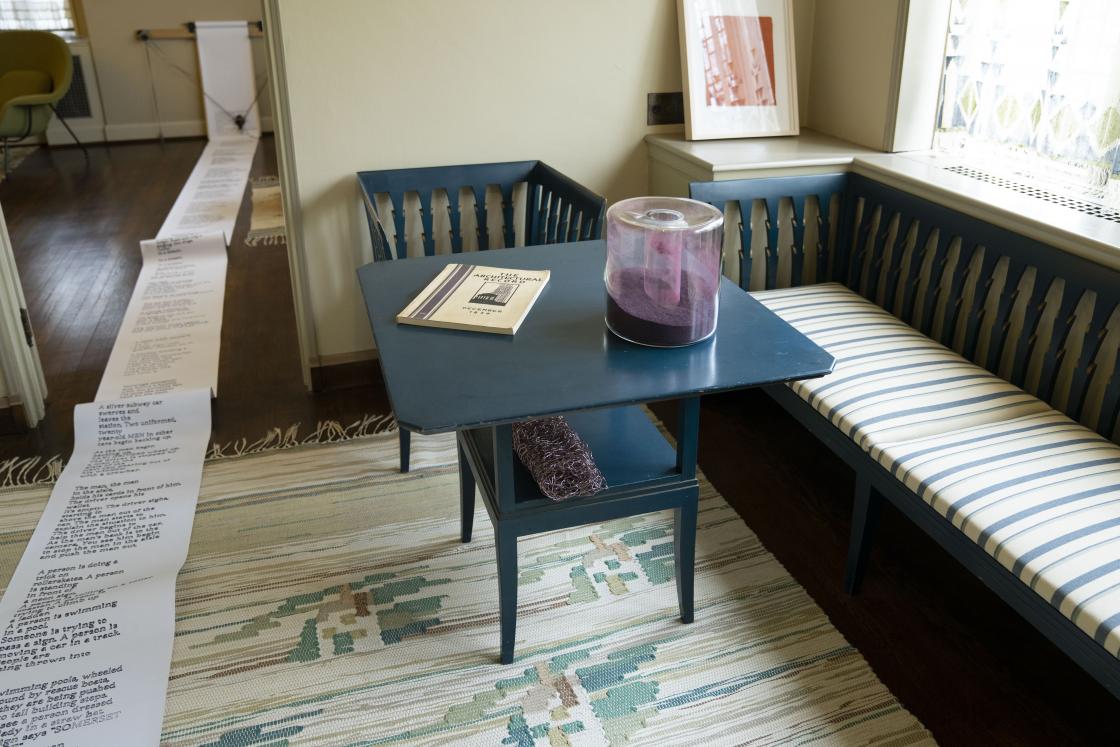 With its product flowing from the wall of the bedroom and down the hall, Vikram Kalidindi’s plotter uses artificial intelligence and a mechanical, counterbalanced pen to compose an endless love letter based on digitized letters between Eero Saarinen and his second wife, Aline Louchheim Saarinen. Kalidindi, who found the bedroom cold and detached on his first visit, used these archival letters between the Saarinens to bring a new tenderness to the space: as the impossible love letters are slowly written onto the scroll, the paper begins filling and commanding the room.

Along the bedroom dressing table and in place of Loja Saarinen’s silverplate and mahogany combs, mirrors, and brushes, A. F. Oehmke placed five tools for textured hair. Each tool has been laser etched with sayings often said by Black mothers to their daughters as they style their hair— “HOLD YA EAR” on the hot comb, “WAVES ON SWIM” on the wave brush, “TO THE ROOTS” on the afro pick, “TILT YA HEAD” on the rat tail comb, and “YOU TENDER HEADED” on the wide tooth comb.

Atop and around the beds, Melika Abikenari placed a series of objects meant to convey memories of touch, trace, form, and place. These objects form a language of ambiguous meaning and speak to her experience of immigration and being in between places—"the concepts of displacement and time, body memory versus brain memory, interior versus exterior.” In the closet, Isabelle Balabis hung her Skin Suit, replete with hands, feet, and, tucked away on the highest shelf, a head. As she writes, “Secrets in the closet; the mask one takes off in a private space." 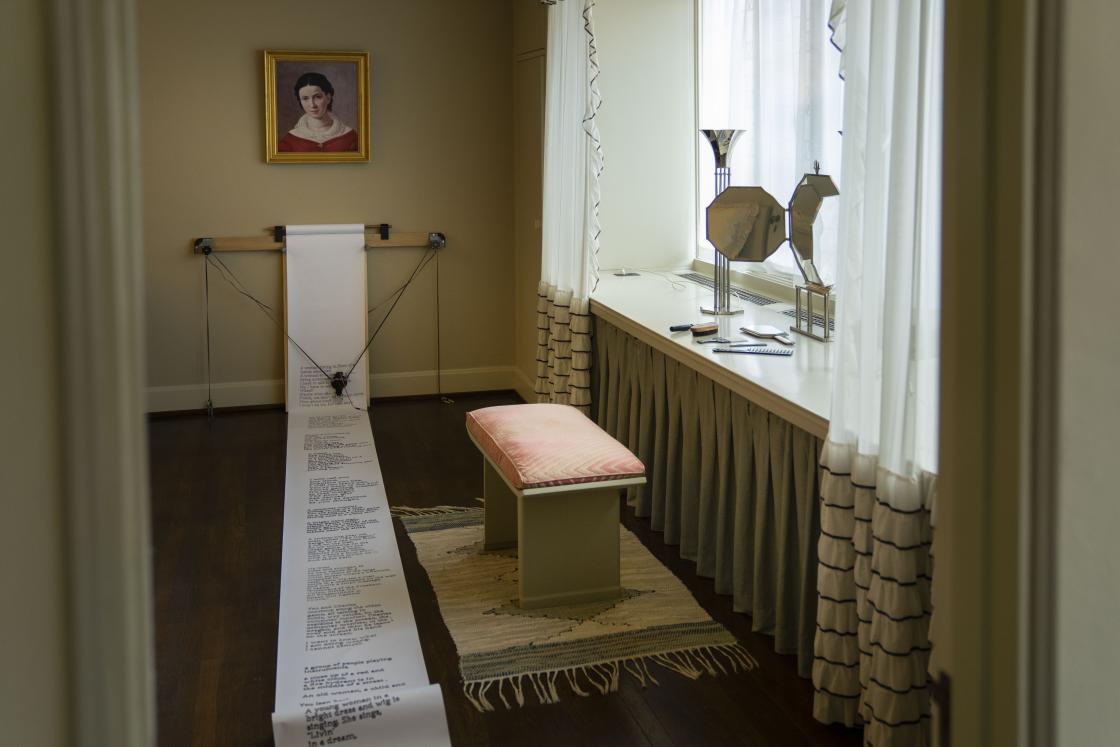 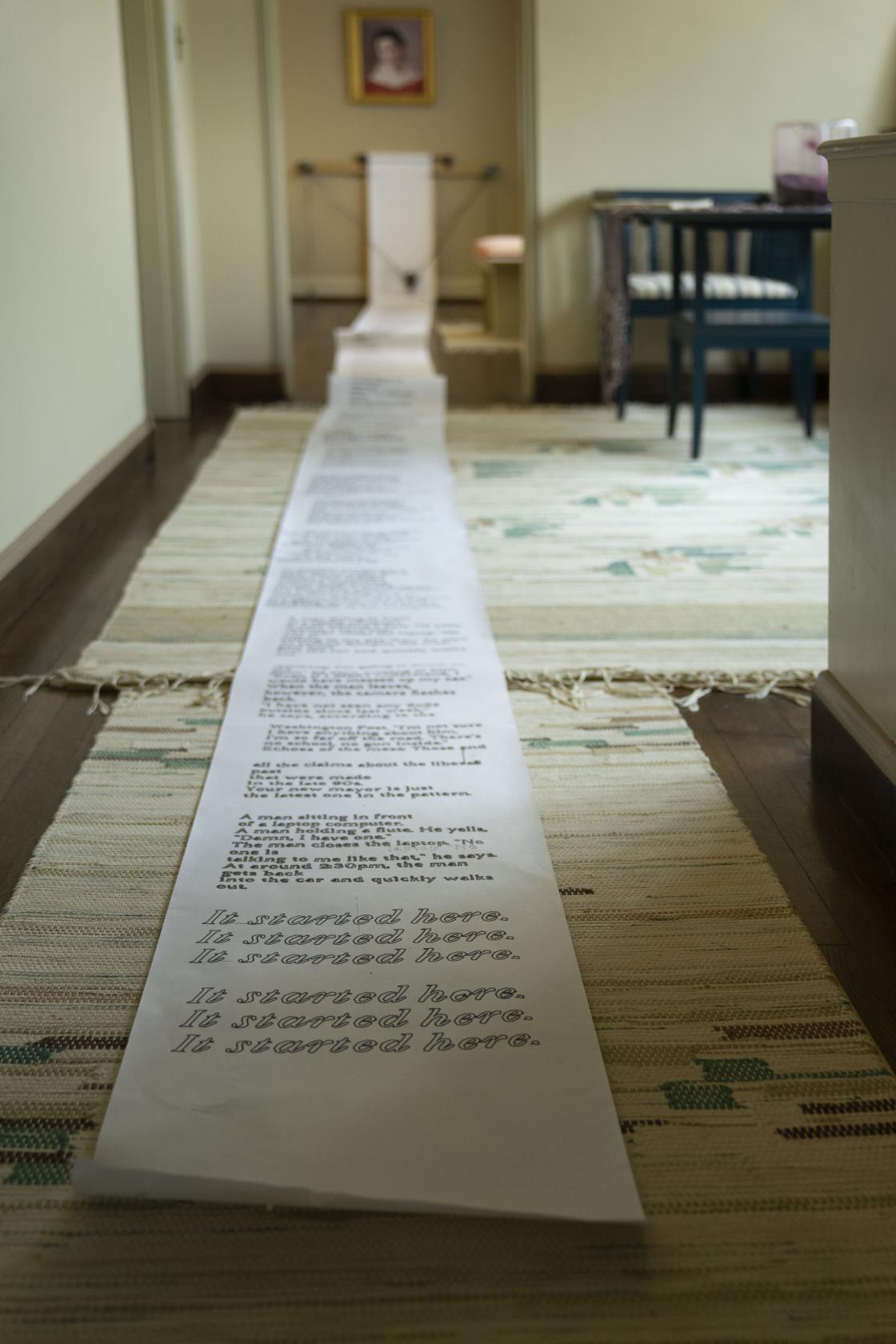 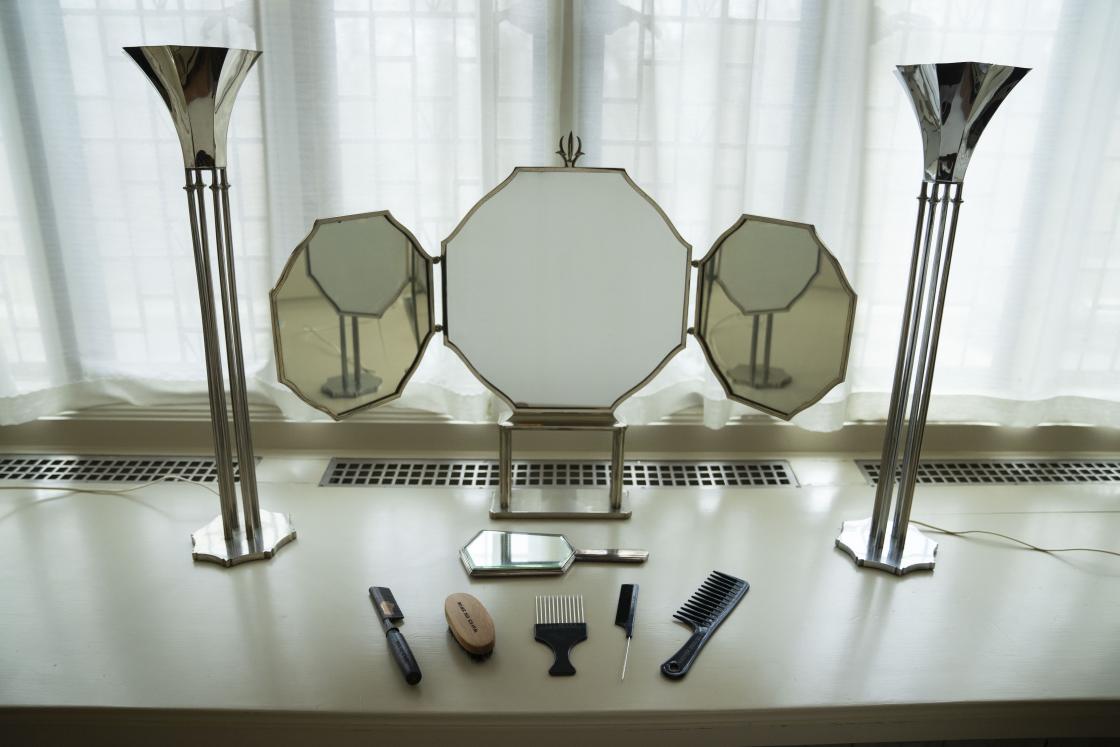 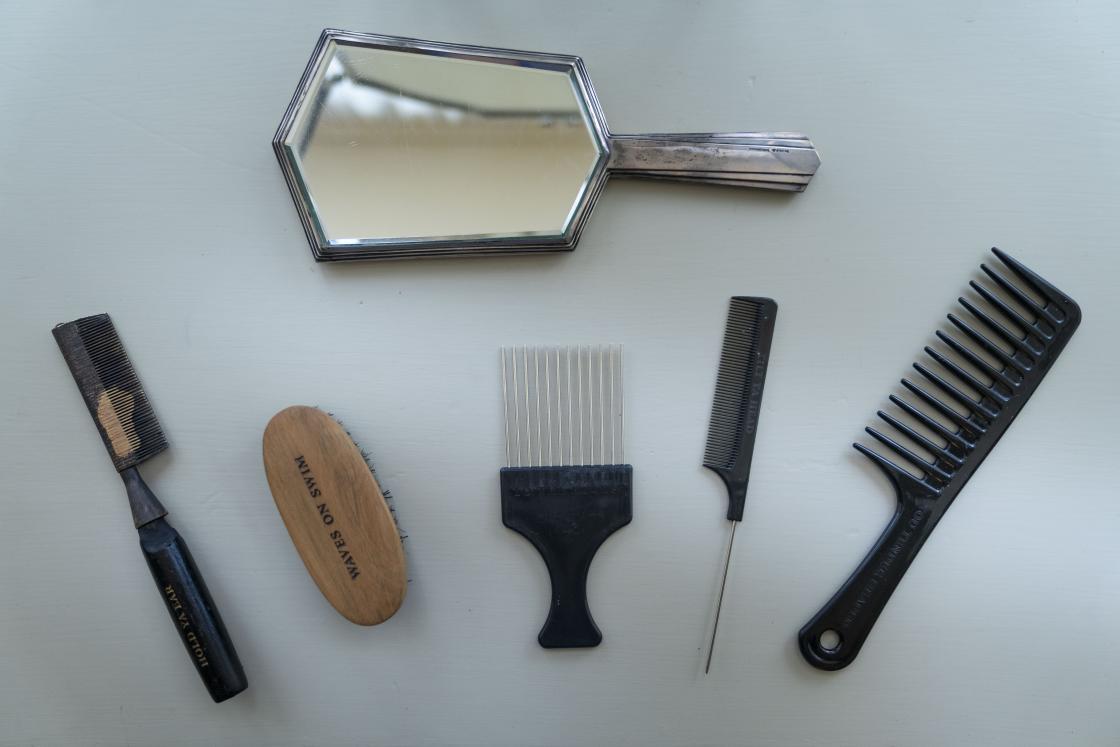 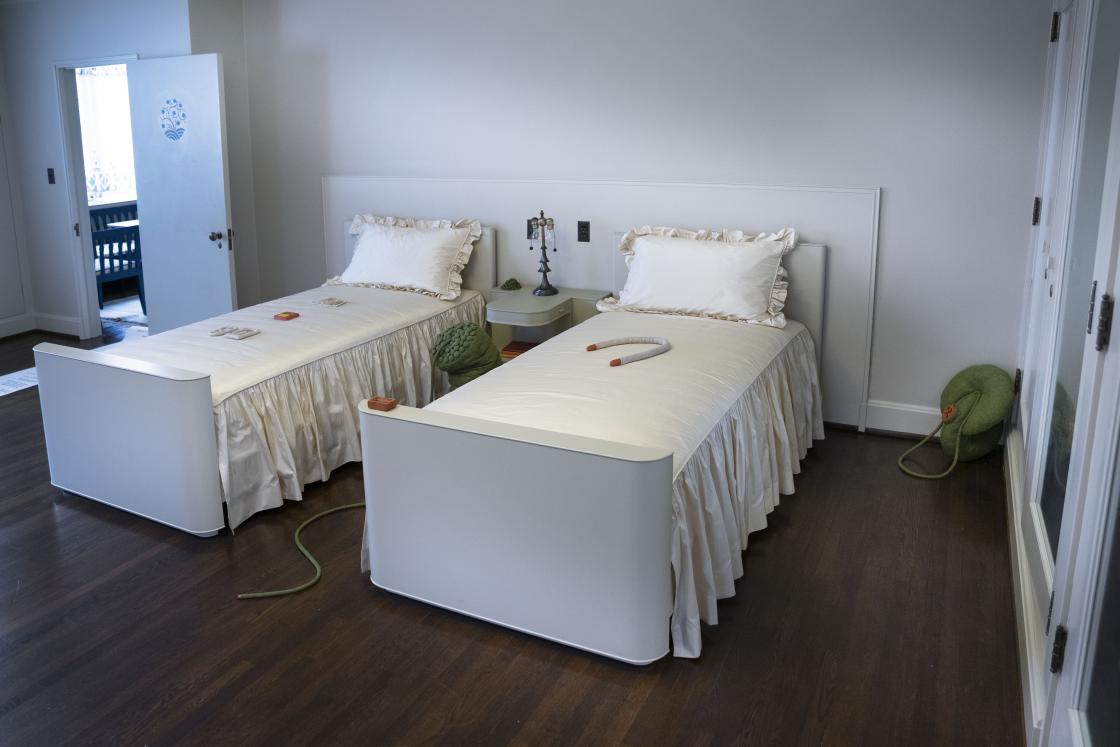 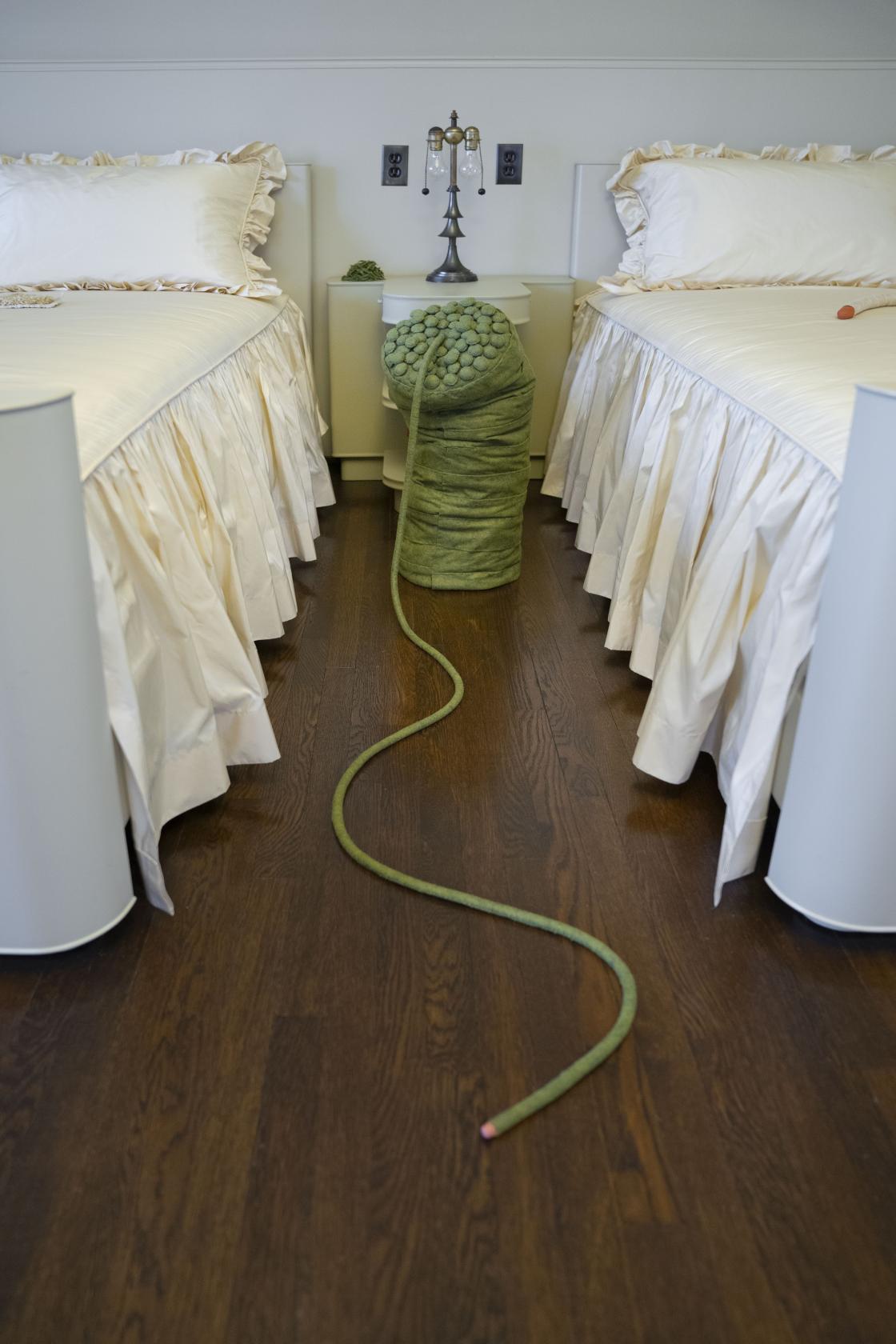 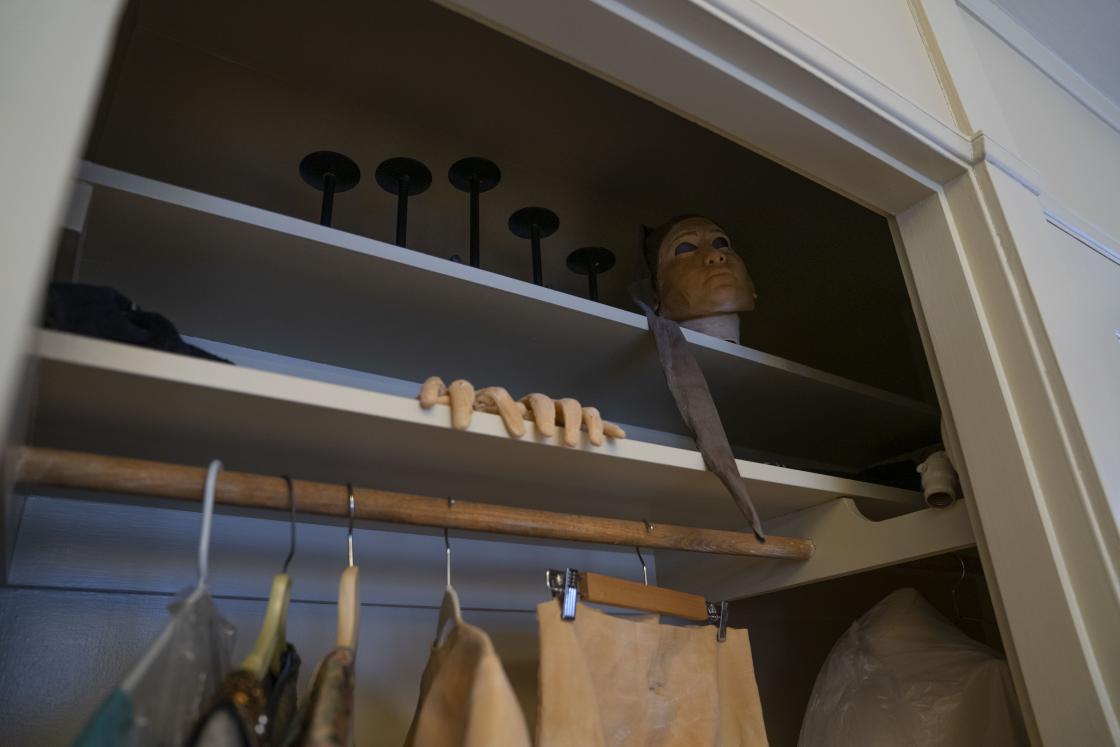 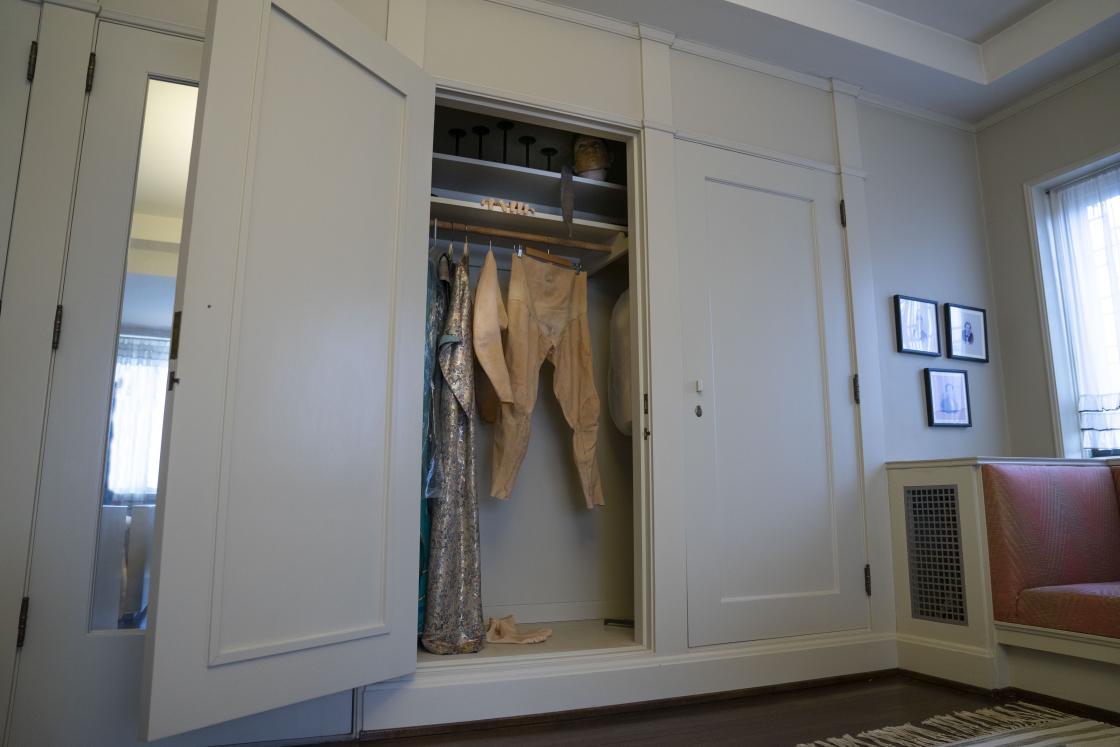 In one of the most personal, and most impressive, rooms in the house, Kaiya McCormick has reconstructed Loja Saarinen’s handwoven bathmat with thousands of aquarium pebbles. Laboring for nearly ten hours, McCormick was interested in ideas of permanence and restraint (the original bathmat) and impermanence and revelation (its pebble replacement). By reimagining one weaving in an alternative, non-traditional method and color scheme, she hoped to indulge the viewer in a more fantastical narrative. If, she writes, “bathing is a sacred habit and profane escape,” then, "perhaps the bathmat is like a stony shore, and carries the trace of a meditative, mythological realm. What hides at the bottom of the lagoon?"

Placed on one vanity mirror, Rachel Pontious’ encaustic recreation of the bathroom tile pattern centers on a painted depiction of a wine glass designed by Pipsan Saarinen Swanson. The glass contains the dregs of red wine and a distinct lipstick mark. On the opposite vanity, Lyric Shen’s strange three-legged creature appears poised to head down the sink. Its jellyfish-like body contains an at once unappealing and engrossing array of objects frozen in place. 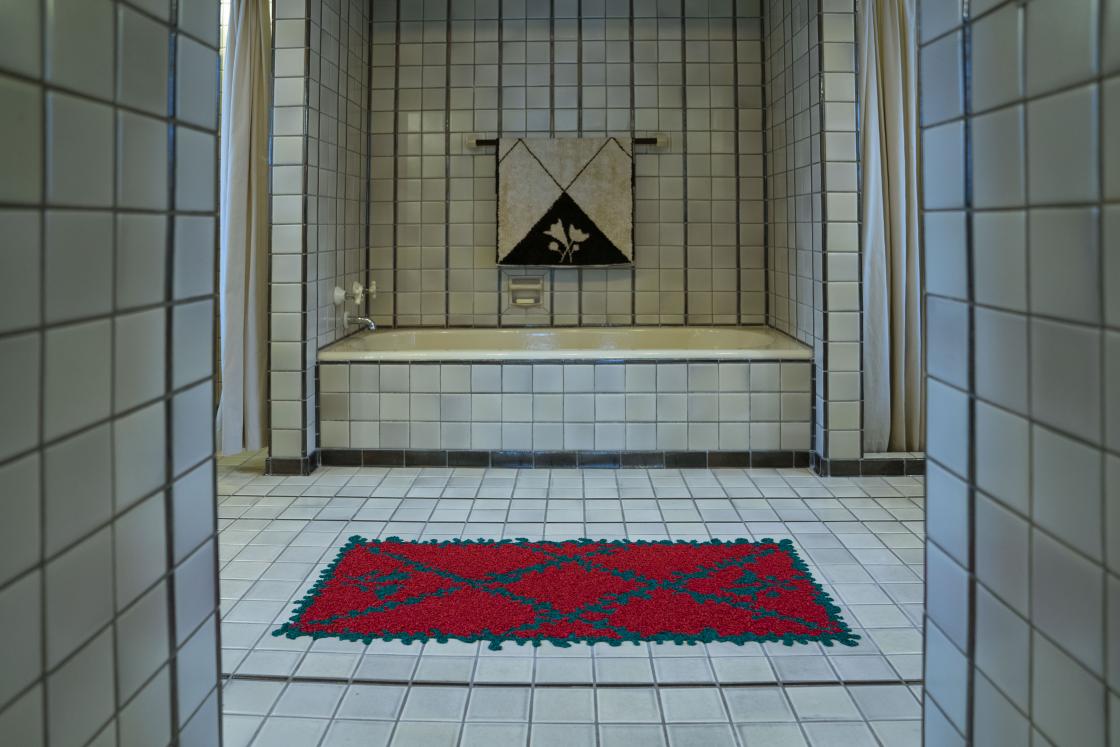 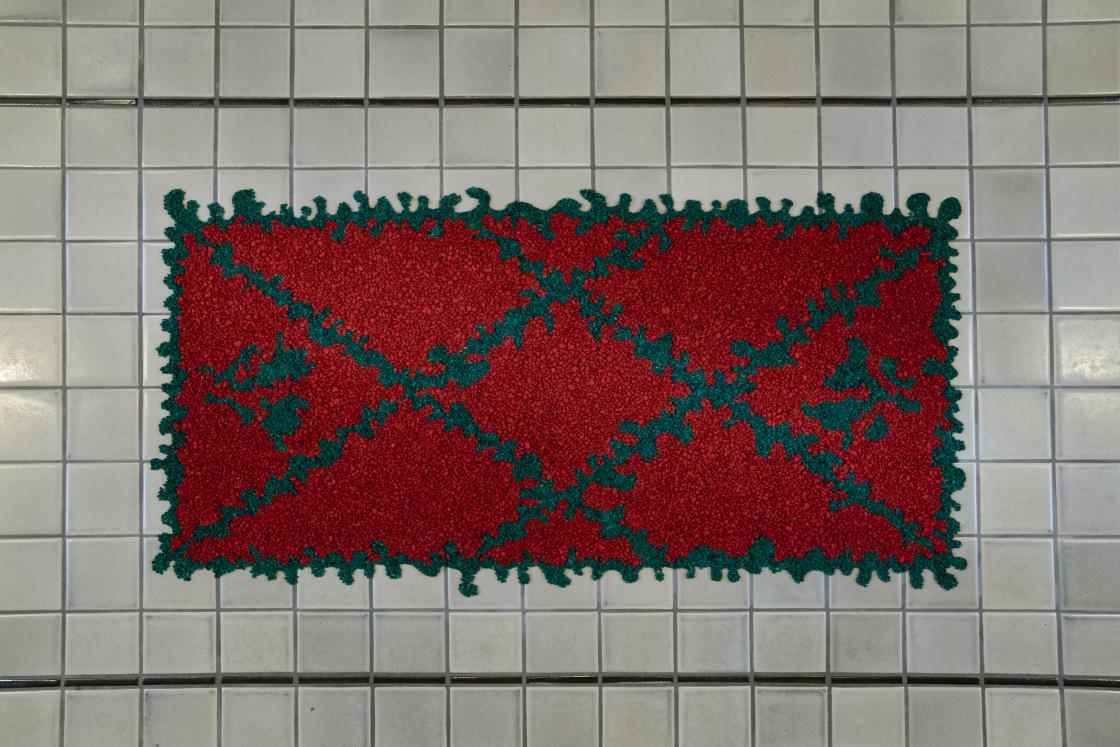 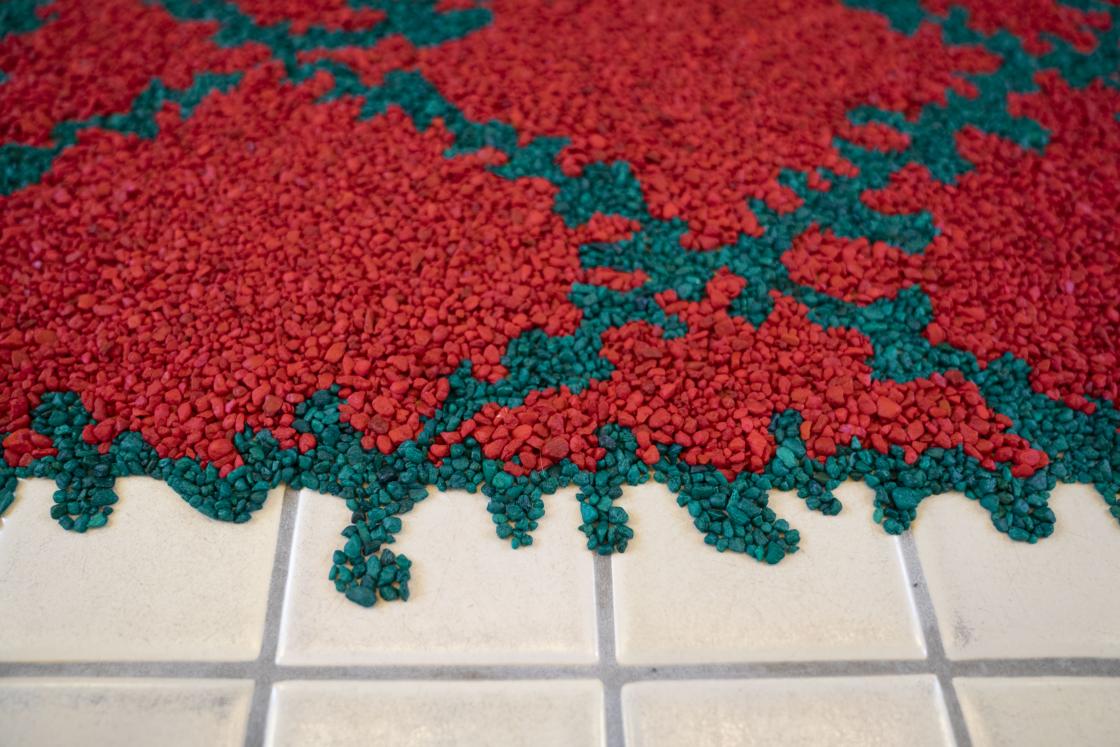 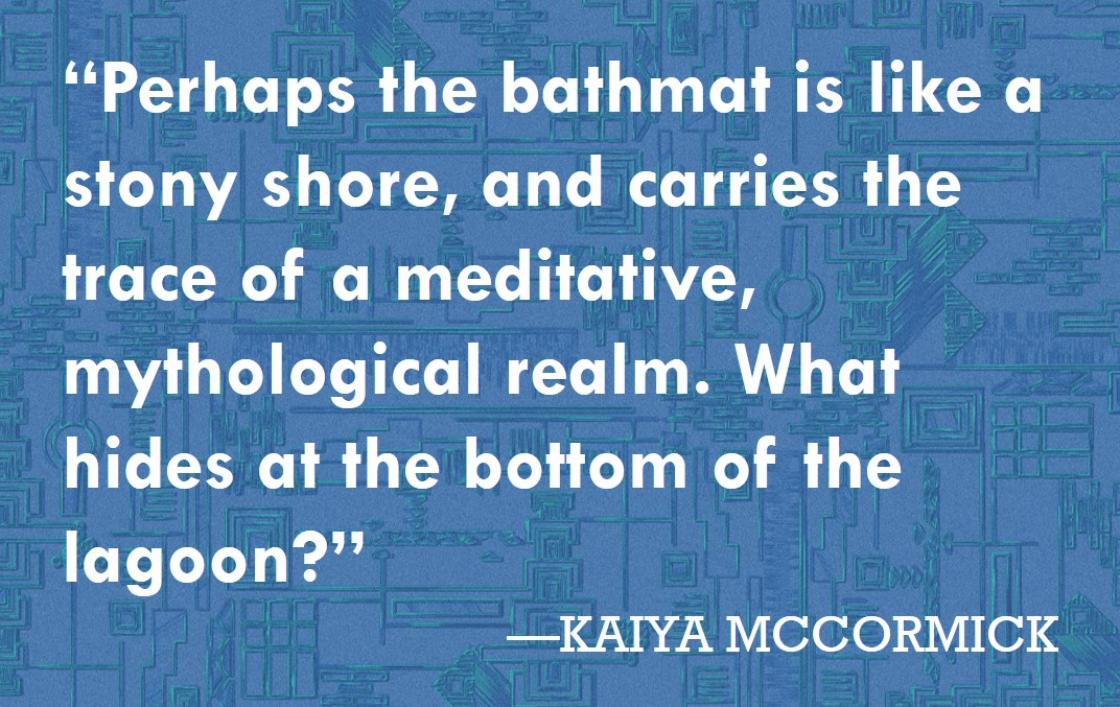 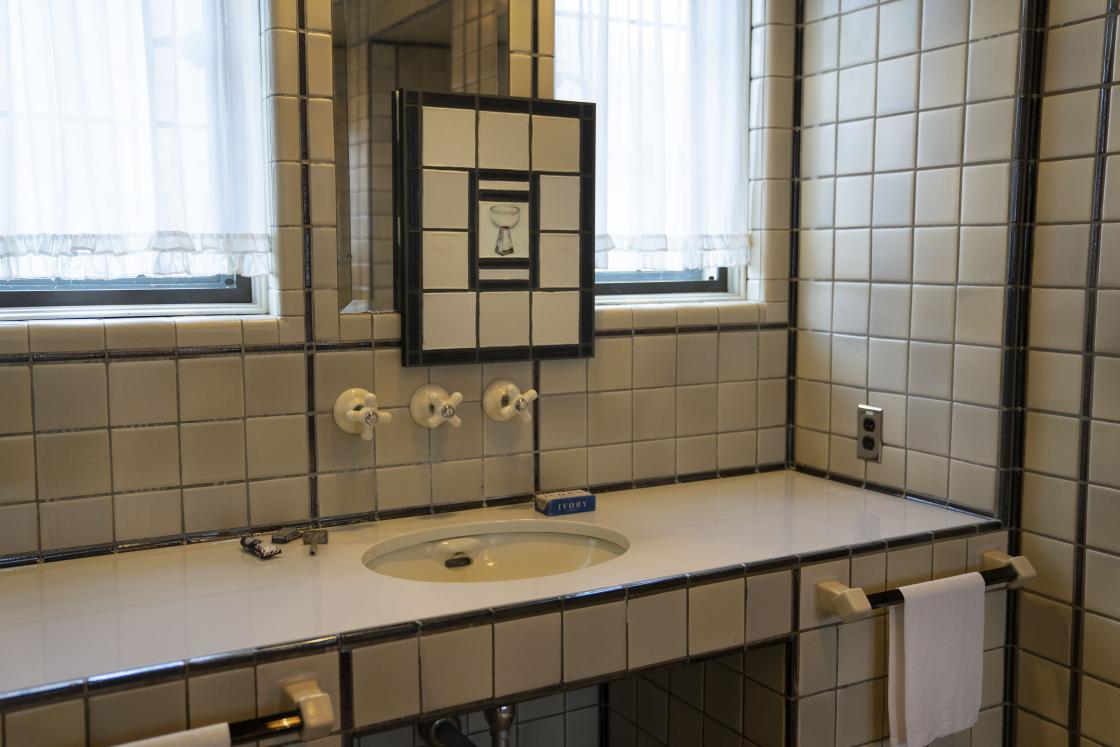 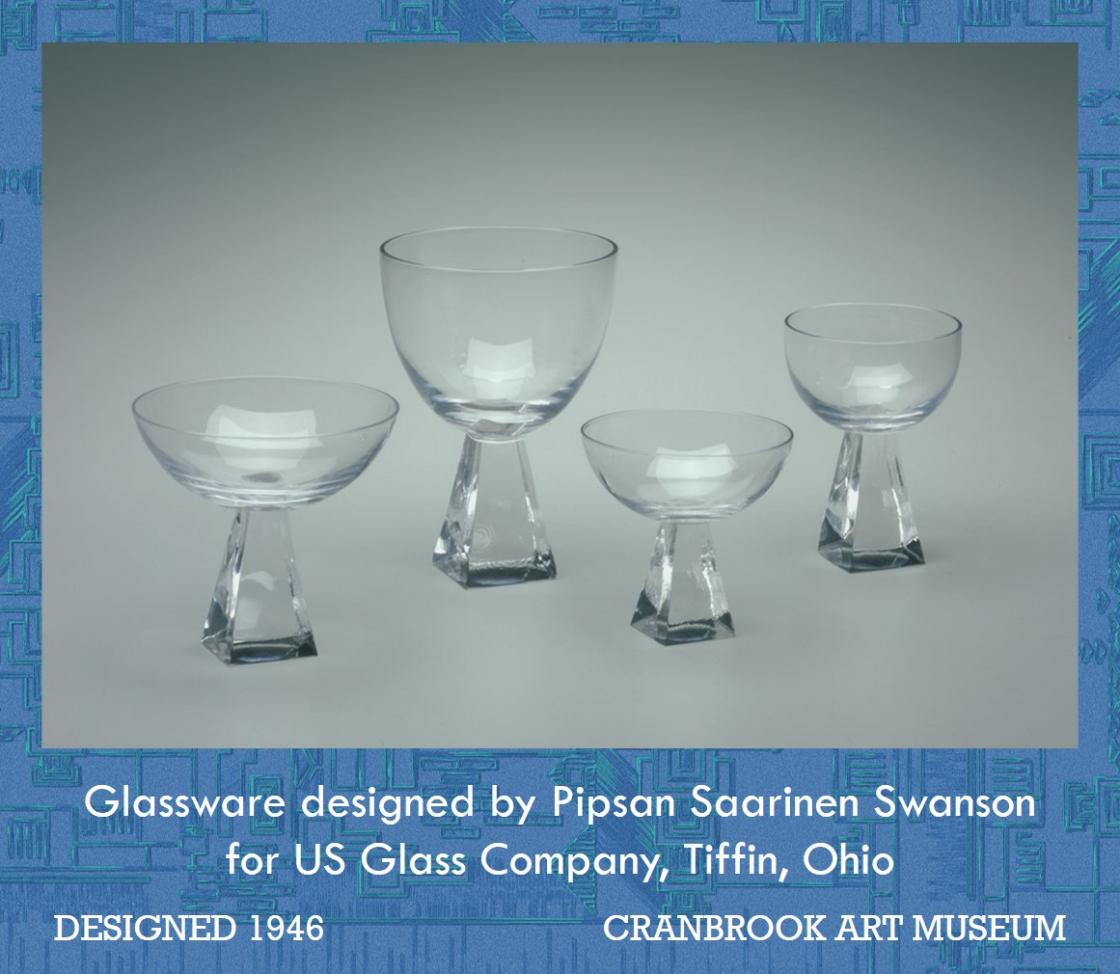 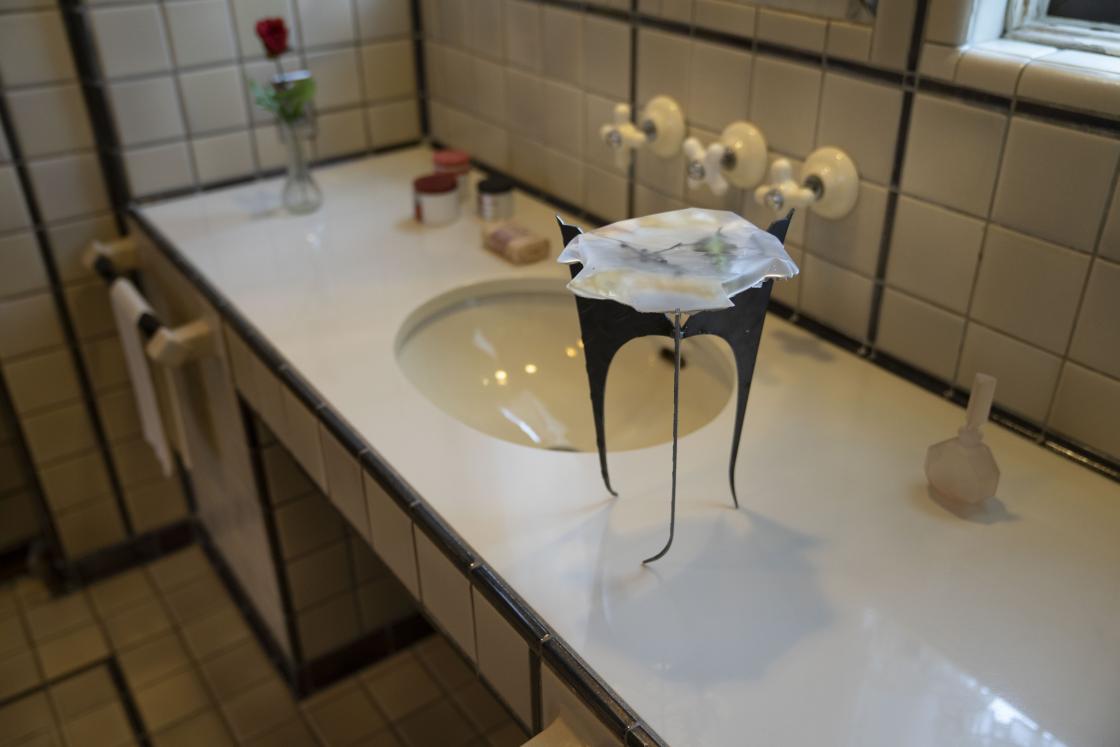 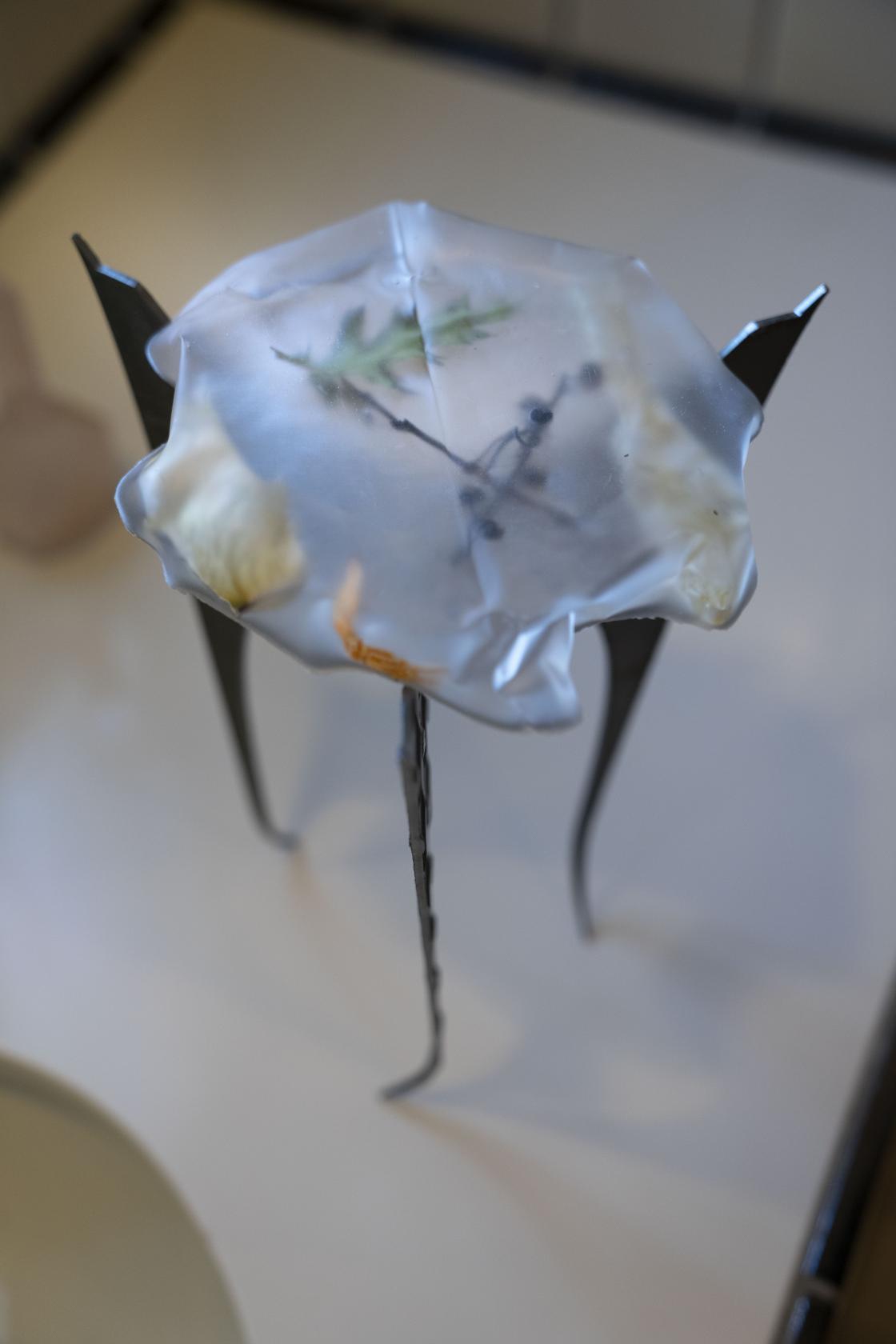