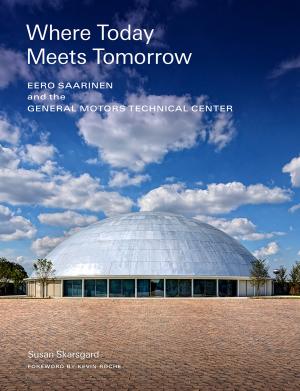 Long before Microsoft or Apple occupied their legendary corporate campuses, there was the General Motors Technical Center in Warren, Michigan. Completed in 1956 and designated a National Historic Landmark in 2014, this icon of midcentury design was celebrated modern architect Eero Saarinen’s first major commission completed independent of his father, Eliel Saarinen, and its story offers a unique perspective on his work.

Author Susan Skarsgard, a former General Motors designer and the founder of the GM Design Archive & Special Collections, weaves a detailed insider’s account of the early days of General Motors, the initiation of the technical center project under Eliel Saarinen, its design and construction under Eero Saarinen, and the enthusiastic acclaim the campus has received since its opening. Many leading lights of midcentury modernism and Cranbrook Academy of Art alumni were involved in the project as design consultants or artists, including Harry Bertoia, Gere Kavanaugh, and Florence Knoll. This lavishly illustrated account is a unique document of a landmark project, presented in photographs and architectural drawings, interviews, documents, and ephemera, many never before seen.